Vivek Shraya, author of God Loves Hair, was kind enough sit down for a chat on the phone about his book, its origin and the themes he explores. The delightfully illustrated collection of short stories was born from a true burst of creativity when Shraya was taking a breath of fresh air from his music career. Here are interview highlights; contrary to the idea raised in our June article (The Queer Desi Dilemma?) that South Asian culture tends to limit nuanced dialogue on homosexuality, Shraya shares his experiences with the openness of Indian culture and in his childhood, the way in which Hinduism was his avenue of expression to celebrate his difference.

Where did the idea for God Loves Hair come from?

It wasn’t something that I set out to do. I’d been reading a lot of queer fiction and what kept coming up was not only the ways I did identify with the stories but also the ways I felt like my experiences were different. I thought about the tremendous difference it would have made had I discovered these books at a younger age. The more I read, the more I felt inspired to tell my story.  So I started writing little blurbs, memories from my childhood. As I began sharing these with friends, I was encouraged to develop them and consider putting it all out into the world, and that’s how God Loves Hair came together. I knew that I wanted it to have a children’s book feel to it with an illustration for each story, even though the writing isn’t necessarily for children. It was really important to have illustrations that had an Indian aesthetic to them and feature figures with brown skin because this representation wasn’t something that I saw in my childhood, outside of Indian comic books.

What queer fiction titles were you reading?

Becoming a Man: Half a Life Story by Paul Monette; Zami: A New Spelling of My Name by Audre Lorde; and Stone Butch Blues by Leslie Feinberg. These books are huge in the LGBT memoir field and were lent to me by friends when I expressed an interest in queer literature. All of them are such brilliant, beautiful books. Stone Butch Blues, in particular, changed my life.

Tell me about your experience growing up South Asian in North America – what impact did it have on your writing?

I grew up in Edmonton, Alberta where there is a huge South Asian population and my family belonged to a number of smaller South Asian communities. This allowed my parents to stay connected with their roots and customs while also helping me to learn and understand my broader identity.

One of the challenging things about being a son of immigrants is that you never feel like you fully belong anywhere, never “brown” enough at times and at other times never “Canadian” enough. This felt important to discuss in the writing, what it means for those of us who live in between worlds. 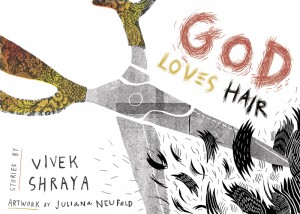 What is your experience with the roles men and women had to play in South Asian society?

I think the roles of South Asian men and women are quite similar to those in North America. The stories in God Loves Hair explore the ways I grew up in a mostly traditional home where my dad was expected to be the primary provider and my mom was expected to play the primary caretaker. What stands out to me about South Asian culture is the places where those lines blur.  There was always room for me to do things that in a North American setting are generally feminized, like cook with my mom, or sing at the religious organization I belonged to.  In that space, strength wasn’t about muscle but about how devoted you were.

When I went to India for the first time, I was surprised to see men wearing wear lungi skirts in public and men holding hands with each other. I recognize that it’s easy for me as someone who grew up in Canada to go to India and romanticize, so I am cautious about my observations as a foreigner, but I was definitely moved by how affectionate men were with each other and the grace with which they carried their bodies.

In an e-mail exchange, you mentioned to me that it can be problematic to use fusion with predominantly Caucasian countries such as America and Europe because of the implication that safe space cannot be established indigenously. Can you expand on this?

In your article, you talked about how you were hopeful of safe spaces that could be created through fusion of culture. I think to imply that a culture needs another culture, especially one that is predominantly white, to be able to create those kinds of spaces is problematic. I think about things like colonization and how it wasn’t until the British came to India that homosexuality was seen as an illegal act. I recently spoke to someone who runs Bombay Dost, which is one of the major gay magazines in India and it was informative and inspiring to hear about the ways queers meet and organize in Mumbai. This is a wonderful example of the way safe spaces do exist, they just might not look the way we as North Americans expect them to.

What role do you think music and art can play in changing or influencing the South Asian or South Asian-American rhetoric around topics like homosexuality?

One of the common things I have heard in my work and interactions with South Asians is that homosexuality is “a North American problem” and that “it doesn’t exist in our communities.” These notions are partly born out of a lack of visibility. We learn to keep those things hidden for safety and to avoid embarrassing our families. But I also think that these notions work to further silence voices, to keep us in the closet.

Art is an incredible medium because it has the potential to educate, to touch someone on a number of levels and shift these notions, but without being accusatory (unless that’s the intention).  One of my favorite illustrations in God Loves Hair is of a young Indian boy with the word PERVERT in big bold letters written across his forehead. This image (by Juliana Neufeld) is almost uncomfortable to look at because it challenges the ways we imagine children as innocent and asexual, an expectation that was the cause of much confusion for me growing up.

Recently, I was asked how God Loves Hair differs from Funny Boy (Shyam Selvadurai), another book about a queer South Asian boy. It is interesting to reflect on how as people of color, you are only allowed so much space, that if one of our voices are heard, however different our actual experiences might be, that is enough. But again art inspires art, thereby creating more room. I am moved by the exchanges I have had with readers who have now been inspired to write and tell their own stories. The more this happens, the more art we make, the closer to we get to the day when no one can tell us we don’t exist.

In the chapter “Dear Vishnu,” you say “I want to be a modern version of you.” What did you mean by that?

In my religious organization we were often told to find the god within us. This was a difficult concept to digest and it felt easier to mimic the gods physically versus find them internally. I was obsessed with the way the gods looked. I remember going to a play about Lord Rama and begging the actor for his papier-mâché bow and arrow. I would walk around with that bow and arrow, believing that I was somehow embodying who Rama was. I worked at being good like him but I also wanted to be physically blue. I wanted four arms.

At that age I didn’t have an understanding that I was queer but I knew there was something different about me. I didn’t fit in with the other boys which created a lot of moments of isolation and loneliness. But there are also these really wonderful moments when queer kids find creative ways to celebrate their difference, such as impersonating Rama or wanting to be a modern Vishnu.

Did you ever have an aversion to Hinduism?

Never. Well that’s not entirely true, given that now I’m an atheist. People’s aversion to or curiosity around the title God Loves Hair is fascinating to me. There’s an assumption that it’s going to be a religious book. In my friend circles and in the queer communities, people are hypercritical of god and religion, which is often completely justifiable. That said, in “Sundays” I discuss how religion and being part of a religious community provided protection and felt safe in ways that my day to day, junior high experiences, that often involved the kinds of bullying detailed in “Gaylord,” were not.

As I grew up, I started seeing things a little differently. In the last story, “God is Half Man Half Woman”, I am critical of the way Sita was treated. Look at the way even Radha was treated. The stories about the Hindu women/goddesses in particular are so heartbreaking and clearly speak to a patriarchy. It was hard to recognize this and become critical of the very same spaces I adored and found refuge in, but ultimately I think faith, real faith, cannot be blind.

Jihii Jolly is a member of Soka University of America's undergraduate class of 2011, majoring in the Humanities. She is Editor-in-Chief of SUA's student news magazine, The Pearl, named for late Wall Street Journal reporter, Daniel Pearl. An aspiring humanistic journalist, she intends to pursue post-graduate studies in cultural writing and communications.