Formula One Romance: The Romentics Series

Formula One Romance: The Romentics Series

‘All happy families are alike; each unhappy family is unhappy in its own way.’

The challenge of romance writing is that by definition it is formulaic. Boy meets boy, boy falls in love with boy, insert some interior conflict or external challenge, insert three love scenes, reach big climax when the challenge is overcome, and end with happily ever after. Repeat.

Scott Pomfret (42) and Scott Whittier (35), the creators of the Romentics series by Scott&Scott, have successfully revved up this classic romance formula over the span of seven novels that have sold over 50,000 copies (still not enough sales to prevent mainstream publisher, Warner, from dropping them after picking up the duo’s sixth novel, Hot Sauce). Currently, Pomfret and Whittier are at work on an eighth Romentics novel: “A romance among college football stars,” they said, that “involves a villain head coach, some deception, and locker rooms, of course.” Pomfret is also at work on a literary novel, The Prostitute’s Son, and a collection of short stories.

The writing partners met and fell in love in 2001 while clubbing in Boston, their home base: “We shacked up the first night and have been together ever since.” The more romantic, fictionalized version of their meeting is available as a short story downloadable from Amazon Shorts, “One Night Stands Strong: A Romentics Short.” Fans are able to follow Pomfret’s and Whittier’s real-life romance through the blog on their website, somewhat out-of-date, but still a fun read. “But we’re both on Facebook, and we keep that up to date!” they said, “Come friend us.”

While they have made a significant enough impact in the literary world to rate a write-up in the New York Times Magazine (“A New Romance” by Alex Witchel, 6/12/2005), both have kept their day jobs. “Writing barely supports our fine wine habit, let alone pays the rent,” they said. Scott Pomfret works as a financial consultant and Scott Whittier is a creative director in advertising. 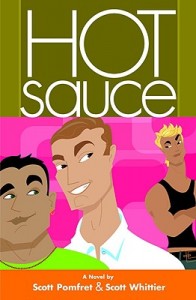 Though Whittier had long considered writing gay romance, he said, “I sat on the idea until Scott P. came along and made me get up too early in the morning to write.” Pomfret had some unpublished novels and published short stories under his belt, but it was Whittier’s advertising background that led to the Romentics series: “We set out with a marketing plan for Romentics before we ever set word to page. We wanted to prove the concept, so that a mainstream publisher would take a chance on us.”

With their home state, Massachusetts, at the center of the gay marriage debate, Pomfret and Whittier had a unique opportunity to marry gay politics with gay romance in their fourth novel, Nothing Personal (Romentics, 2005), which chronicles the fictional race of pro-gay marriage, Cuban-American Carlo Batista’s run for Ohio state assembly against arch-homophobe Tony Scipione. While they also manage to get in a few jabs for immigration and health care reform, this is a romance novel, and the genre can only be stretched so far, so the focus is on Carlo’s simmering relationship with the apolitical Brian Gallagher. As for Pomfret and Whittier’s own marital status, they said, “We are not hitched. We’re strong believers in marriage rites/rights for those who want them, but we’ve got almost ten years under our belts, a vacation house together, and baby fish—what more could you want?”

Their vacation home in Provincetown served as the idealized ‘Seaside’ in Surf ‘n’ Turf (Romentics, 2006) their sixth novel. They say, “We had the most fun writing Surf ‘n’ Turf, because it is the most campy of the books.” The Romeo and Juliet plot line is played strictly for laughs, as the resort town’s two gay gangs, the leather Meanies and the drag Queenies, try to separate our heroes, the strawberry blonde and Southern accented Blakely Crawford and the masculine, but bookish Robert Gibson. Yet once again the Scott&Scott team subvert the romance genre by introducing a subtle criticism of gay cultural stereotypes and their destructive impact on gay relationships. They even introduce an interesting theory of gay role-playing through the character of Jimmy, an Asian anthropology student who has gone undercover, so to speak, as a Queenie to study gay role-playing for his university thesis. Perhaps Pomfret and Whittier pushed the genre’s limits a little too far because, they say, “Our audience hated it.” Their typical readers, Pomfret and Whittier said, are “Women from middle America, typically with a few kids. Very literate, very passionate, but decidedly straight.” They said, “Australia is a big overseas market.” 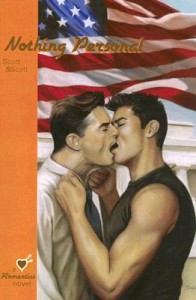 After seven novels how do they keep those sex scenes as exciting as they do? “We have lots of sex ourselves,” they said. “That seems to do the trick.”

The balance between playfulness and the serious demands of romance creates a certain tension that doesn’t always quite come off. For example, in their most recent romance, E-Male (Palari Books, 2008), our heroes, the tall, dark and green-eyed Zac Djorvzac and cute blonde twink Kory Miles, are paired off in a climatic box dancing contest against the arch-villain Trevor, with both their professional lives and their love at stake. It reads even more over-the-top than the “Dream On” sing-off between Neil Patrick Harris and Matthew Morrison in “Glee.” Pretty funny stuff, but because the genre is at heart serious it came off as ludicrous rather than humorous.

But “We emphatically aren’t writing ‘true-to-life’ stories. They’re all idealized. That’s the point of romance, in our view,” Pomfret and Whittier say. Except for the Boston-Bermuda setting of Hot Sauce (Warner, 2005), the other Romentics books have settings in fantasy tropical resorts or universalized suburbs and towns. Their lovers are centerfold idols with names like Blayne and Trent and who look like you’d imagine a Blayne or a Trent would look. Their soap opera villains are almost more interesting, like the conniving (and hilarious) Aria Shakespeare in Hot Sauce. The comical gay sidekicks, who tend to appear like the chorus-from-out-of-nowhere in an old-fashioned musical, provide convenient plot devices and background color. 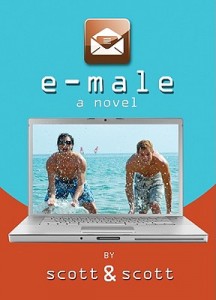 Yet, Pomfret and Whittier consistently sneak into their lovers’ lives some fairly significant ethical conflicts that threaten their happy endings. For example, their first novel, Razor Burn (Romentics, 2003) opens with the straight-laced and married Blayne doing the down low with Ben, who, though out of the closet, has some secrets of his own. In E-Male, Kory Miles, the creator of a gay dating website is secretly snooping on his site’s users in order to play matchmaker. His matchmaking instincts are what make the site so successful, but playing Yenta threatens to undermine his relationship with Zac. Likewise, in Spare Parts (Romentics, 2004), the furry mechanic Dan picks up urban artist Trent when he mistakes him for a prostitute. Even when it becomes clear that Dan is interested in more than a one-night stand, Trent can’t be certain that part of his appeal to Dan isn’t Dan’s desire to “save” him from the streets. Typically, one or both of the lovers will have some dark secret lurking in his past that threatens their future happiness together.