In my last column I reviewed Rough Trade, edited by Todd Gregory. That book and the two reviewed here were finalists for this year’s Lambda Literary Awards.

The Low Road by James Lear is a seventeenth-century adventure set in a Scotland worthy of Rob Roy with a hard on.  Young Charles has lost his father in a war with the English and lives with his mother on the family estate. 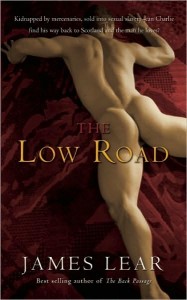 His first encounter with sex is with a handsome groomsman who disappears when the secretive French Lebecque arrives as his tutor.   In the months that follow he fears the tutor is trying to replace his beloved father and sneaks out to watch Lebecque jacking off in his room late one night.  When the English raid the place they take Lebecque. We later find out  he had a great bod and he’s been trying to save Catholic Scots from the English. He’s had the good fortune to have a prison guard who took pity on him when he saw the bruises and marks from beating he’d sustained when captured, and writes to Charles what has to be the longest note ever smuggled out of solitary confinement describing what he’s done on behalf of his family.  The guard is well built; they get naked and do each other.   When Charles finds out Lebecque is in prison he sets out to free him even though he’s broke.  Along the way in a storm he stops at an inn seeking a warm meal.  He’s turned away by owner but one of the rough men at the bar says he’ll provide food and drink if Charles can sing a Scottish tune, which he does.

I quickly tossed the whisky off in one go, gasped and sat down.  My head was spinning, my knees weak.

“Ah, he’s a bold lad,” said the middle brother, gripping my thigh, “and it’s cruel of us to torment such a child such as he.”

David, the youngest brother who was still warming his bare legs at the fire, lifted up his shirt and pulled aside his undergarment.  A large, soft cock flopped out into the open. In the firelight, and to my fuddled senses, it appeared to be golden.

“Yes, and more!”  It would have risen to any challenge, no matter how dangerous or humiliating.  I stood up, untied the drawstring at my waist  and let my trousers drop to the floor.  I was wearing nothing underneath them.  My cock was, perhaps, a little longer than his, certainly, it was thicker.

The scene continues with cock comparisons, cock sucking, fucking.  One of them squirts “another load inside my arsehole, I came all over his hairy belly.” The evening ends with a gang bang and a blow to Charles’s head.

Our hero finds himself in the hold of a ship heading to Liverpool to be interrogated by the British general on charges of insurrection. The next days are full of all the things you’d expect men confined to ships without women to do with each other including a lot of piss, sucking, fucking, and sex with a potato.

We also see Lebecque still a prisoner in better digs who finds ways of getting letters to Charles and confesses his love.   Still in prison and serving as a tutor he debauches himself with a strong blond student.  In the end Charles and Lebecque find each other, cement their bond and journey back to the ancestral Gordon Hall in the Scottish highlands.  Camping one night under a tree they talk about the importance of love and friendship.  When they arrive at Gordon Hall they go to the stables and find Alexander, the long lost groom, and a young, blond stud who’s been helping him keep the estate up in Charles’ absence.  All ends well on the shores of Loch Linnhe with more moaning in the gloaming.

This is a good book for a long plane trip that will keep you occupied for hours with all its plot twists and turns and enough debauchery for a second Martini.  Make sure you have a blanket to cover yourself or easy access to the water closet in case the story piques your interest. 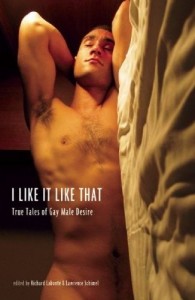 “… I am the Denzel of dick. I have been offered cash, airfare to the East Coast, and (I jive you not) marriage by men who seemed not a whit what I might look like from the neck up.”

“I don’t usually like getting sucked off, but this guy’s tongue and mouth are so wet they make me forget everything and shoot my load.  He spits some out and wipes his mouth.”

And then he goes to a leather bar quite drunk where “Nobody is the least bit interested.  Jesus, what’s the problem?  I was hot before.”  He goes back to another bar where he meets Fernando, and they go out to have sex in the dirty book store. Fernando wants to leave the door of the booth open.  “Soon there’s a crowd.  Well, three guys… I know one of them an attractive weirdo. Young but with grey hair.  I had sex with him once because he has a cute face, but he wouldn’t let me kiss him, and didn’t really want to be touched.”  On Saturday he goes to a spa where “I don’t find anyone attractive; in fact, it looks like an episode of Star Trek where you’ve landed on the Planet of the Uglies.”  He finds someone and tries to give him a blow job but the guy acts like he’d rather be somewhere else.

Been there?  Done that?

We shook hands.  A buzz moved through me, as if I’d stuck a fork in a light socket.  Our hands held each other and we saw the future.  I saw a kiss in a bus station in Scotland. I saw us fucking each other a thousand times and then once more.  I saw a tearful parting in Pittsburgh International Airport.  I saw hours of long-distance phone calls.  I saw hearts that might open to each other. I saw the impossibility of the situation becoming possible.

Some people (parents? college roommates?) think our lives are pornographic, but they’re not.  Stories like Tim’s were not written to titillate, my definition of pornography; they express his very human feelings. Reading Tim’s story and others in this collection, we see ourselves and learn a bit more about our world. The rest of this collection is perfect night-time reading. One or two stories at a time to give you something to dream about.