‘The Kiss Murder’ & ‘The Prophet Murders’ by Mehmet Murat Somer

‘The Kiss Murder’ & ‘The Prophet Murders’ by Mehmet Murat Somer

The first two novels of a Turkish series are now available in English. The so-called “Hop-Çiki-Yaya” (i.e., gay) mystery series stars an unnamed cross-dresser who is part owner of an Istanbul club catering to various kinds of cross-dressers, most of them hookers. The club attracts transsexuals, bisexuals, gays, and more than a few closeted and sometimes deeply conflicted homosexuals. The narrator self-identifies as gay but enjoys dressing up as his favorite female movie stars. In the club he takes an almost proprietary interest in his “girls.” When several of them are murdered, he finds himself pulled – reluctantly in The Kiss Murder, more vigorously in The Prophet Murders – into searching for their killers. Though neither novel is much of a mystery in the conventional sense, they both offer pleasurable reading experiences. (The Prophet Murders has one of the most delightful set of acknowledgments that I have ever encountered.) Most readers probably will come away with quite a different picture of the Middle East than that which they brought to the novels. 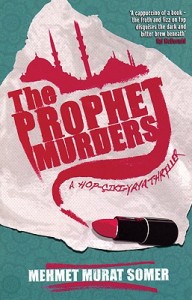 In The Kiss Murder, Buse (Turkish for “kiss”) is murdered after she indiscreetly makes known that she possesses incriminating evidence documenting a relationship between her and a prominent government figure. That evidence is supposedly stashed in the apartment of the victim’s blind mother. The narrator finds himself caught between more than one set of people after those documents. In The Prophet Murders, someone first sodomizes, then kills cross-dressers whose male names are those of Muslim prophets, murdering them in a twisted manner somehow based on that prophet’s life. Thus the body of Yusuf is found in a well, much as Joseph was cast into a well by his brothers. The narrator’s suspicions quickly fall upon the heir to a supermarket fortune, the strangely charismatic Adem Yildiz. The only problem: there is absolutely nothing concretely linking him to the deaths. In both cases, but particularly The Prophet Murders, the narrator pulls upon his considerable computer skills (his day job is creating networks and trouble-shooting for business customers) and upon the extensive network that he has come to know of cross-dressers, their clients, and his own sexual partners.

The series is being published by Serpent’s Tail in England apparently in the order in which they were published in Turkey and by Penguin in the U.S. in the order in which they were written. Both publishers could have been more helpful. The novels are presented without introductions or background information. A reader discovers only upon concluding each novel that all along there has been a glossary of untranslated terms at the end. And though the list of prophets at the beginning of The Prophet Murders is helpful in keeping track of what is going on, it would be nice to have a cast of characters for each novel. I kept getting confused with unfamiliar names that sometimes superficially resemble each other.
——

Snapshots from an Editor: Working with Edmund White
'Party of One: A Memoir in 21 Songs' by Dave Holmes
'Chicago Whispers: A History of LGBT Chicago Before Stonewall' by St. Sukie de la Croix