‘Rough Trade’ and ‘A Sticky End’

‘Rough Trade’ and ‘A Sticky End’

In my first week as Lambda’s male erotica editor I received enough pornography to keep a lonely woodsman happy for an entire winter.  The first one I picked up was A Sticky End, a Mitch Mitchell mystery (great alliteration).  Mitchell is a wealthy doctor out to discover who murdered Bartlett a wealthy married man who’d lavished attentions and gifts on Morgan, a married banker who is one of Mitchell’s favorite bottoms. 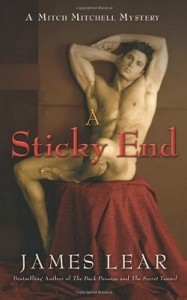 James Lear’s A Sticky End jolted me back into those years, providing all the details of the time and place, the fear of discovery.  The book has all the intricacies befitting a Sherlock Holmes mystery and Mitchell has a libido that never fails him when there’s another character he can fuck.   In late 20th century England we meet enough hard bodies, greedy mouths and willing asses for an arousing afternoon’s read.  Like the good modern gay hero, Mitchell takes it up the ass as well as fucking countless hard supple bodies.

Two excerpts will give a bit of the flavor of the book.  Mitchell and Bert, a muscular man, go to a music hall in London.  The Duchess Theater is “elaborately decorated – vulgarly…with glass shades fashioned to resemble flame.”  Customers snooze and one pair of men have their laps covered by raincoats. Bert sticks a couple of fingers in Mitchell’s butt during the performance of a Mayfair dandy who changes into a policeman’s uniform that is taken off to reveal a young female.  In another scene Tahib, a masseur, “was getting firmer now, using the heels of his palms to press against my rib cage, pushing the air out of my lungs and forcing me to breathe heavily. The rush of oxygen into my body was intoxicating – and of course my cock got harder.” This is a story that kept my interest with plenty of muscles, sweat and a dollop of affection as Mitchell meets and seduces enough men to solve the mystery and save his friend.  The book reminded me of Joseph Hansen’s Brandstetter mysteries, which were the first works of popular gay fiction I read that had no apologetic tone, with a sober, wealthy insurance investigator and his wild Black boyfriend living well and solving crimes in Los Angeles. 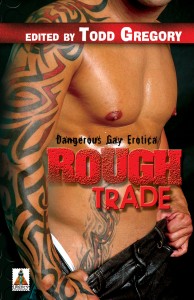 The lesson: Be kind to our friends who get paid for sex. They have hearts, too. Sometimes big ones.

'Vanilla' by Billy Merrell
'Rivering' by Dean Kostos
Silas House: On Capturing The Rural South and Loving in a Fraught Political Climate