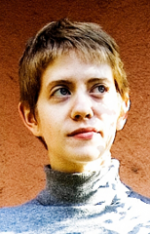 Each week, the Spotlight features an ally who writes, reviews, publishes, or is in some other way involved with LGBTQI speculative fiction. Our guest this week is Katharine Beutner, author of Alcestis.

Katharine is currently a graduate student specializing in 18th century British Literature at the University of Texas in Austin, but her first novel, Alcestis, reflects her B.A. in Classical Studies from Smith College. Alcestis is a retelling of a Greek myth from the point of view of a woman who usually doesn’t get a voice. It explores the gender roles and sexual politics in Greek mythology, and the inherent power imbalance in relationships between mortals and gods.

Katharine has a short story in Lady Churchill’s Rosebud Wristlet #19, and She is currently working on another novel, Killingly. She identifies as bisexual, and appreciates the Outer Alliance for its ability to bring queer-friendly speculative fiction fans and writers together. In addition to her personal webpage, Katharine maintains a Twitter feed as @katharine_b. She lives with her husband and two cats.

OA: What made you decide to retell a Greek myth, and why this one in particular?

KB: I’ve always loved Greek mythology, but my desire to tell this story was a response to Euripides’ Alcestis, specifically. I knew the myth of Alcestis from the Rainer Maria Rilke poem, which I love — but it ends with Alcestis disappearing after she has chosen to go to the underworld in her husband Admetus’s place. I was outraged when I realized that, in most traditional versions of the myth, she’s then rescued by Heracles after three days in the underworld. I knew Alcestis was seen as a model wife because she’d sacrificed herself for her husband, but I hadn’t known that she’d been won back like a trophy so that the story would end happily. I wanted to retell the story in such a way that the basic facts would match the play’s narrative, but the tone of the story would be entirely different — to make it Alcestis’s story, to follow her into the underworld and see what happened to her there. Part of what happens to her, in this novel, is Persephone.

OA: Ancient Greek culture was full of male queerness, but we don’t usually hear all that much about the women. In Alcestis, it seems as though women may have the same kinds of homosexual attachments that men do, but that it is less socially acceptable. What’s your take on that? 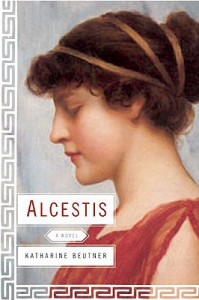 KB: In my version of Mycenaean Greece, at least, women are simply considered less important, and in some ways less human than men (even classical Greek culture reflects this, I think). So I’m not sure that I’d say that female queerness in Alcestis’s society is less socially acceptable than male queerness — I think it’s more that any show of defiance or passion in a woman, any evidence that she considers her desires more important than the needs of men, is definitely frowned upon. I based this largely on the way women are treated in the Homeric epics; nobody cares what Penelope’s feelings about waiting for Odysseus were, she’s simply expected to remain faithful or get slaughtered when he comes home.

OA: As a classics scholar, where would you advise a newcomer who enjoyed Alcestis to begin with Greek mythology?

KB: Well, this isn’t really very scholarly, but I began with the D’Aulaires Book of Greek Myths when I was a kid, and I still think it’s stunning — it’s full of illustrations that will make you think of William Blake, just gorgeous bright colors. Beyond that, each of the big three Greek dramatists has his own specialty. If you like soap opera, read Aeschylus; if you like procedurals and believe in dramatic unity, Sophocles; if psychological realism in crazy circumstances is your thing, Euripides. (I’m a Euripides girl, myself, despite my irritation about his version of Alcestis’s story, but I see the appeal in the others, too.)

OA: You’re currently working on another novel, Killingly. Can you tell us anything more about that?

KB: Sure — it’s also a historical novel, but it’s set in 1890s New England, and concerns the disappearance of a student from Mt. Holyoke College just after it became a college rather than a seminary. I went to Smith, and I loved women’s college culture, so I’m looking forward to trying recreate the world of a late nineteenth century women’s college. I managed to get to Mt. Holyoke last June to do some archival research and found some amazing things; I’ve also been reading “college novels” from the turn of the century. My favorite so far is called A Sweet Girl Graduate. Seriously.

OA: You’ve got a pretty full plate. How do you balance your fiction writing time with your PhD work time and other life commitments? Do you have any tips for busy writers?

KB: I wish I were better at time management or had easily-applied tips to share! I think understanding your own working style is important — some people enjoy working on two or more projects at once, while others (like me) really need to focus on one thing at a time. I find that I tend to need to divide my time into chunks rather than managing multiple threads of work simultaneously; right now, I’m working on my dissertation, but once I have a draft of it finished, I’ll go back to working on Killingly. Of course, other administrative stuff always pops up, but I try to limit myself to one major project at a time.

Launch Pad Astronomy Workshop: A Stellar Program for Writers
Jeanette Winterson: It is the Imagination that Counts
Dale Peck: Lost and Found