The last time I was at Gay Pride, I was surprised and dismayed to bump into the Pillsbury Doughboy handing out free spatulas. I felt bittersweet as I walked away clutching my kitchen utensil (and wondering if it were for pancakes or spanking), thinking on the one hand how nice it was to see Pillsbury’s corporate logo was LGBT (could a Pillsbury Doughboi be in the offing?), but on the other – how sad! How pathetic! A freedom parade turned into a corporate marketing event!

If you prefer your queerness with a heavier dash of the red and the black, Homobodies #1-5 are for you. 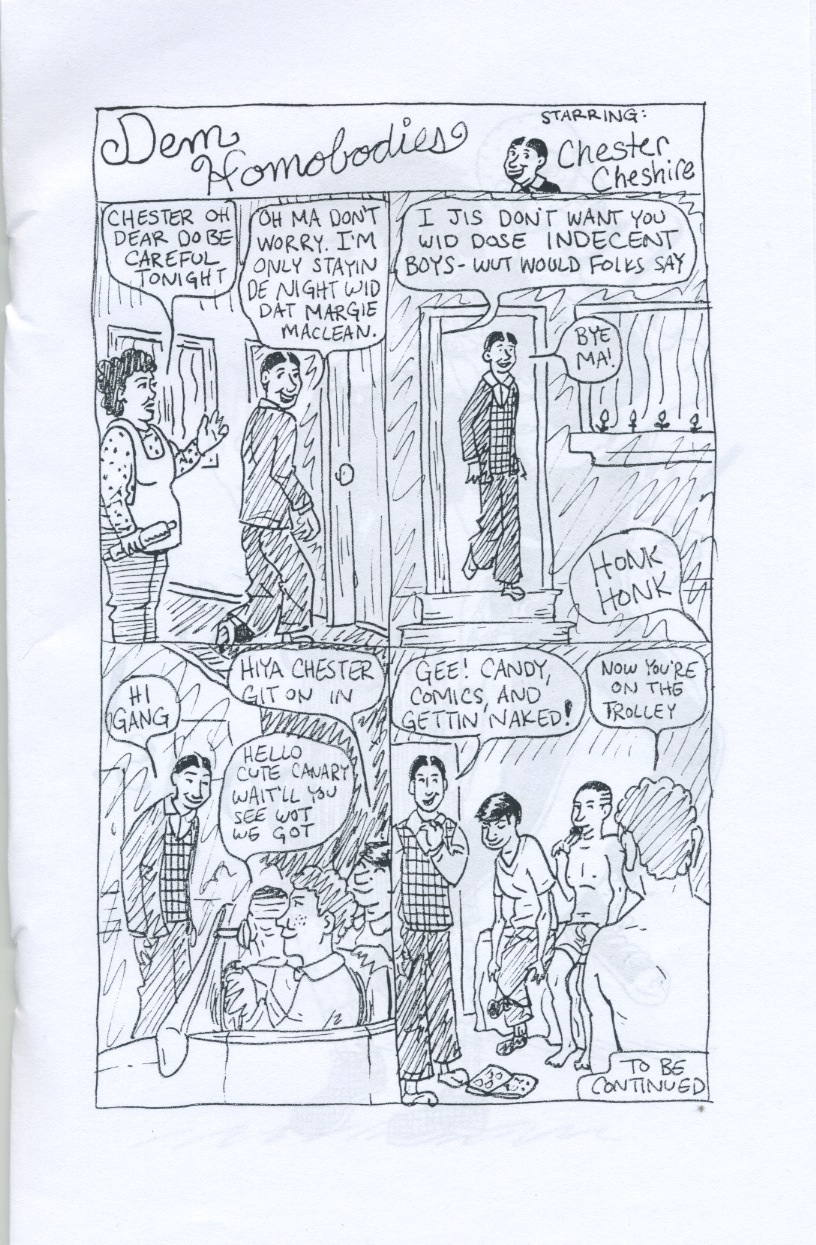 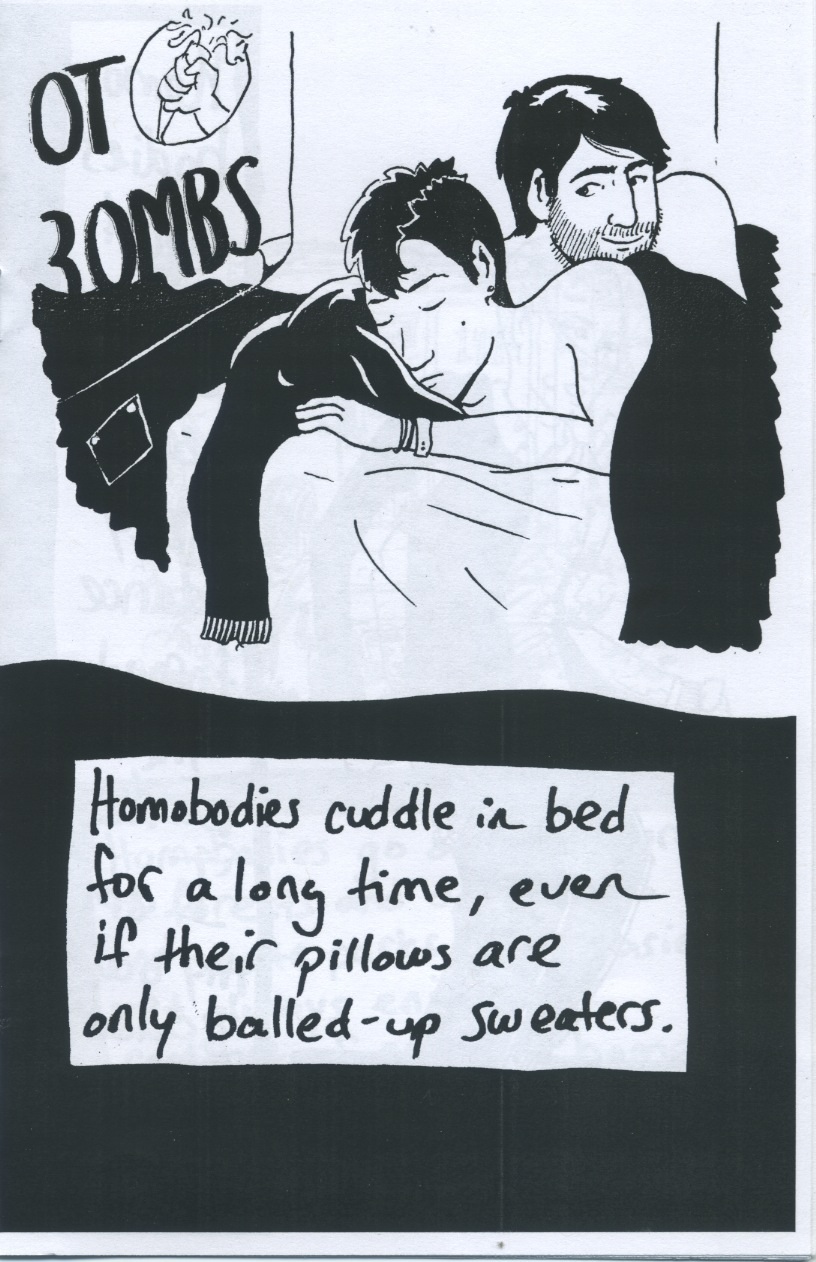 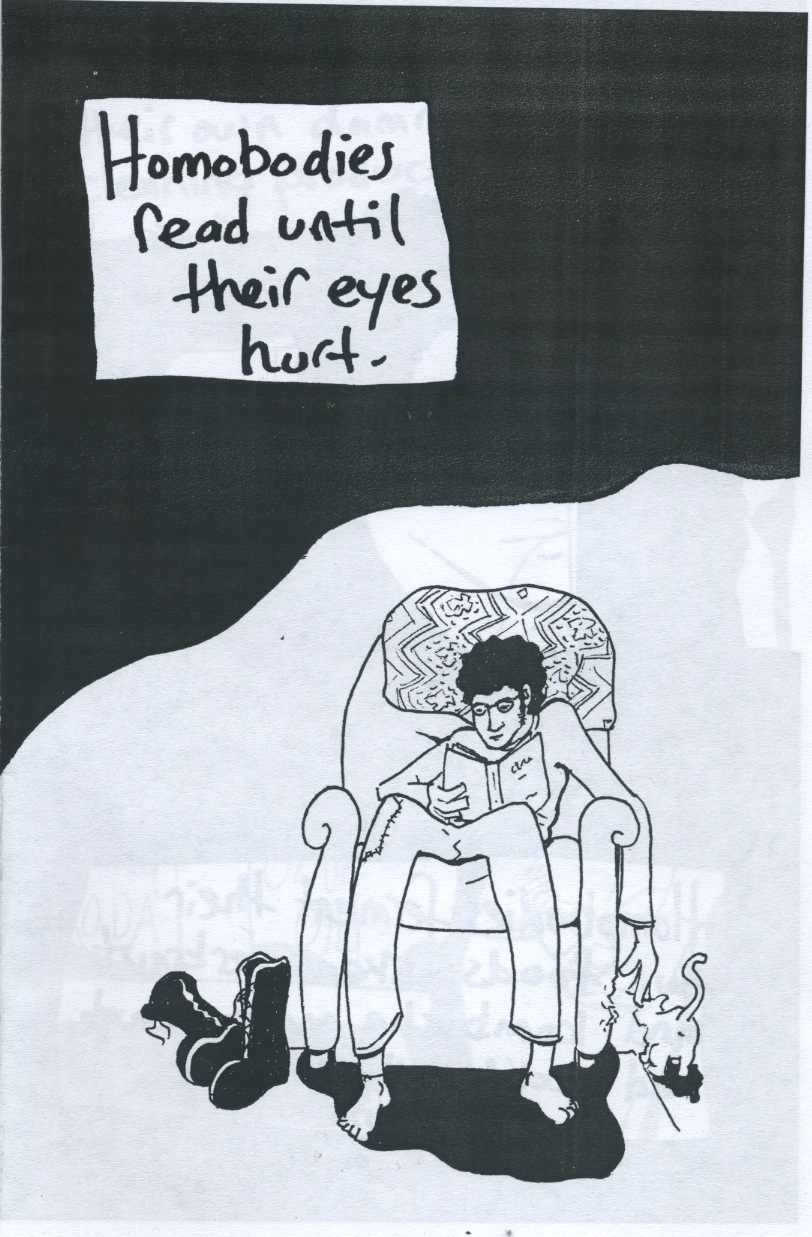 Homosexuals’ are –supposed- to all go to the gay bars, the gay clubs, anywhere with the ‘gay night’ – they shop, dine out, party in style and repose in class, taking cues from gay icons, and movies and popular magazines.

Well, what about the homosexual homebodies – HOMOBODIES?

Instead of going out clubbing, Safari’s characters stay home and make soup, read library books, and “…cuddle in bed for a long time, even if their pillows are only balled-up sweaters.”  In true anarchist fashion, Safari jumps around and writes about whatever he wants to write about. Each issue includes comics, rants, musings and giggles under the covers.

In issue 5, Safari writes gay comics in the style of the newspaper funnies from the 1940s, parodying strips like Gasoline Alley, Our Boarding House, and Smokey Stover.  Those comic strips were as much about how people talked as what they said; though now we cringe at imitations of black dialect, it’s often forgotten that back then, most working class speech was ridiculed. Safari captures it just right. In Dem Homobodies, starring Chester Cheshire, Chester tells his worried ma, “Oh Ma don’t worry. I’m only stayin de night wid dat Margie MacLean.”  Instead he sneaks out in a jalopy with the gang. These boys know how to have fun. “Gee candy, comics and getting naked!” Chester declares, glad to be a part of this indecency. “Now you’re on the trolley,” a pal replies. Will Kevin Keller, the new gay Archie character, ever be allowed this much fun, or such hip patois?

Safari includes political commentary too.  “Why is it called a nuclear family?” he asks in issue 4. “This definition includes less than one-quarter of households today!” The page features a sign that says “NUCLEAR FAMILY DISARMAMENT.” “What can I do?” readers ask. “Start a collective for queer minorities!” Safari replies. “Invite your grandparents too!”

Another page shows kids at a house party, where the band’s lyrics come from a cover of “The Lavender Song,” a pre-World War II German cabaret ditty. “The crime is when love must hide — from now on we’ll love with pride.”  Other one-page drawings are just nice testimonials: “Homobodies make their own damn cleaning products!” and “Homobodies host potlucks and craft nights.”

Gay Lisp is a brilliant short mini-comic, an almost-rebus about what it means to lisp. Safari riffs on how lisping and gay lisping are read and misread by the mainstream. Does lisping make you “not normal” because you can’t talk like everyone else, because you’re gay, or because you’re from Madrid?  This funny smart comic demands you read the pictures as well as the words to figure it all out.

'Diaghilev: A Life' by Sjeng Scheijen
'The Island of No Secrets and Other Stories' by Lou Dellaguzzo
'Mundo Cruel' by Luis Negrón