‘God Says No’ by James Hannaham

‘God Says No’ by James Hannaham

Stereotypes:  gotta love ‘em, gotta hate ‘em.  Mostly, though?  Hate ‘em.  With his first novel, James Hannaham deftly avoids the two most common stereotypes of gay African-American men (the rugged but closeted dynamo; the overly flamboyant drag queen) for someone more unassuming and painfully real.  Gary Grey, the overweight narrator of God Says No has neither the flash of E. Lynn Harris’ characters nor the “Lord ha’ mercy!” minstrelsy of a closeted choir director (another infamous stereotype), and Gray’s struggle with marriage, religion and desire becomes all the more moving for its real-life dimensions.

We first meet Gary at a Christian college, fighting his roommate over a broken Jesus.  Gary’s language, by turns sincere, naïve and lustful, reflects not only a religious upbringing, but also his Southern roots; he describes a love as fleeting as “a sugarcube in a hot shower.”  But even as he tries to remain true to his moral code—chastising those take the Lord’s name in vain, for instance—his desire for other men overwhelms up his judgment.  Gary prays for the Lord to change him but soon takes matters into his own hands:  he impregnates and wed his fellow student and Disney World admirer, Annie.  Despite his best intentions, however, Gary finds himself drawn to public restrooms and parks for his sexual urges until he finally finds himself in an ex-gay ministry.

Here, too, Hannaham avoids portraying the ministry as villainous.  Even if the ultimate goals of Resurrection Ministries is suspect, the support mechanism the men in the ministry provide is touching, even as they relapse with too-long hugs or unsportsmanlike butt-grabs.  The men undergo aching crises of faith; the seeming incompatibility between the life they’re required to lead and the life they’d like to lead proves poignant. 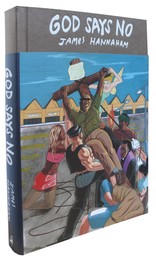 The section between his marriage to Annie and his admittance to Resurrection Ministries, however, is problematic.  Through a plot contrivance, Gary is able to escape from Annie and creates a new identity, “August Valentine,” deciding to give the ‘gay lifestyle’ a trial run.  He finds a lover, Miquel, and work with a theater company, but being able to express his sexuality doesn’t free Gary from his hang-ups—religious or sexual.

The humor feels forced in this section.  Whereas part of the novel’s strength it Gary’s self-deprecating considerations, here, it relies too much on stereotype.  Rex, the mime troupe director who hires Gary, steps out of central casting for a pretentious, self-important artist.  And Miquel, for all his charm and talent for bon mots, is little more than a drama queen.  Character-wise, Annie could chew Miquel like a chicken bone.

I’m surprised, as well, that the author doesn’t engage more with the issue of Gary’s weight.  More often, his weight is used as a punch line.  Even when a fellow bathroom cruiser calls him a “fat f***ing n***er troll,” Gary still gets some play.  Though God Says No is far from an “issue-oriented” novel, given both the racism and body image problems within the gay male community, it’s a wasted opportunity to engage both more fully.

Those issues aside, God Says No proves to be overall as big-hearted and full of love as its narrator—not that I’m trying to stereotype or anything.

GOD SAYS NO
By James Hannaham