‘Expressway’ and ‘Unleashed’ by Sina Queyras

‘Expressway’ and ‘Unleashed’ by Sina Queyras

Sina Queyras’s two new books share some of the same concerns. Queyras asks in both her poetry and her prose, how do we move around in the world? How do our means of transport affect our engagements in the world? What are the consequences of how we move on how we think? In spite of the common questions that ground both of Queyras’s recent books, Expressway and Unleashed are very different projects.

Expressway is Queyras’s fourth collection of poetry following her 2006 Lambda Literary Award-winning collection, Lemon Hound. Lemon Hound is a tour de force; it meditates in particular on the work of Virginia Woolf and Gertrude Stein through playful and soulful responses to the work of both writers. Lemon Hound is both lyrical and political, feminist and literary, lesbian and human; it is to me one of the best books of poetry by a lesbian in the first decade of this century. Expressway is a different type of project than Lemon Hound, though both are shaped by an inquisitive and obsessive mind attending to the contemporary world.

The poems of Expressway are divided into nine sections and are concerned with the automobile and the infrastructure and landscape it spawns as the primary mode of transportation in the United States. Queyras, a Canadian who has lived for extended periods in the United States, maps expressways both literally as “smoothing each nuisance of wild, each terrifying/Quirk of land, uneven, forlorn paths” and metaphorically, with the expressway standing in for “progress.” In the poem “Progress,” Queyras writes, “The expressway was born in A[,]” then “what citizens of A lack in political options they make up for in pastry choices, in supermarket items, in numbers, in health-insurance packages, in phone plans.” “Progress” interrogates meaning in the twentieth century and the impact of progress and commercialization on the United States. 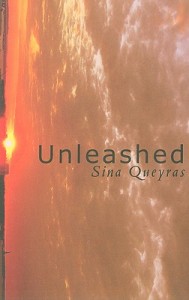 Queyras’s poetry is deeply political, but Queyras has multiple engagements, which is what makes her work exciting. She explores expressways as a trope for progress and for United States hegemony and brings her poetic eye to a series of fatal car accidents across the United States. These are images and ideas that a reader expects from the title, but Queyras is adept equally at dwelling in the pastoral of Dorothy Wordsworth. Eclectic engagements characterize Queyras’s work, but any suggestion of characterization of her work immediately brings a morphing to something new, intelligent, and provocative.

The sounds of Expressway are striking. Queyras captures in language what has become the white noise of our transportation and media background. Queyras’s attention to sound, form, image, and language in her poetry is keen; the result of this attention to the art and craft of poetry and of her expansive, penetrating mind makes Expressway another powerful collection of poetry. In short, Sina Queyras is a poet to read and reckon with.

Unleashed, Queyras’s other project published in 2009, is not a collection of poems but rather a collection of blogs. After Lemon Hound was published, Queyras began blogging. The meaning and significance of blogging and Queyras’s own commitment to blogging are interrogated regularly by Queyras. She wonders, “What would I have after ten years of blogging?” She announces on Wednesday, November 22, 2006 that the Lemon Hound blog “will officially end along with this turbulent year.” Fortunately, it doesn’t. Queyras still blogs, and in April 2010 she was elected “Poet Laureate of the Blogosphere.” While Queyras’s ambivalences and questions about blogging are important, her accomplishments on her blog are evident within the blog and in Unleashed.

Unleashed as a collection in many ways announces the blog entry as a new genre object. Unleashed introduces readers to a sharp, critical mind; Unleashed captures the breadth and depth of Queyras’s critical writing on the blog as well as the range of her concerns. Queyras understands the world by walking, many of the entries discuss walking in New York City, and her own creative work is fostered by engagement with all forms of art. Reports on visual art, cultural events, and poetry fill Unleashed. Queyras’s writing on her blog, Lemon Hound, and collected in Unleashed is incisive and provocative. Whether reporting impressions of a visit to an art gallery, framing and positioning the work of a (woman) poet, or reflecting on her own creative process, these blog entries—sometimes informal, sometimes elliptical, sometimes polemical, sometimes discursive—are a delight to read. Collecting the blog entries in a book makes catching up on the conversation easier, and Unleashed highlights the value of engaging in a sustained way with Queyras’s work. As an aside, recently Queyras has been using Twitter in addition to her blog; her Twitter persona reveals another layer of her depth and perspicacity as a poet and critic.

Unleashed and Expressway are two ways to join an unfolding conversation about poetry and art with the distinguished poet, critic, and bon vivant Sina Queyras.