Douglas A. Martin: Going Back

Douglas A. Martin: Going Back

Douglas A. Martin opens Once You Go Back (Seven Stories Press, 2009) with an unusual instruction. “Pretend you are my sister.” In this semi-autobiographical narrative (his sixth book) the speaker addresses reader directly, forging a distinctive and riveting bond between the two. Martin remodels the infrastructure of the “novel” as he blends truth with invention, hindsight with foresight, speaking through an indelible nameless, ageless narrator.

Its chapters mimic the fractures and boundless associations of memory while placing You steadily at its center. “You are bound not to remember much of this, like later there will be things you’ll try not to.” Martin’s style contains traces of Augusten Burroughs and Anne Carson—he recounts the most peculiar moments of an exceedingly peculiar past with heightened lyricism and sage wisdom—while striking authentic, innovative notes of his own.

ZP: Once You Go Back [OYGB] is labeled “a novel” but it pulls from various sources: memoir, dramatic monologue—insofar as there are no external voices—and even epic poem. Do you consider your work hybrid, or do you reject the idea of genre and seek to create something less classifiable?

DM: Once someone asked me what I wrote and I said simply, “Literature,” because I wanted my writing accepted on its own terms.  I don’t gravitate toward the form of poetry so much…but I feel compelled by it. I pay attention to the sentence with a kind of poetic mind.  The novel is a genre I want to debase in a different way than I would a poem. 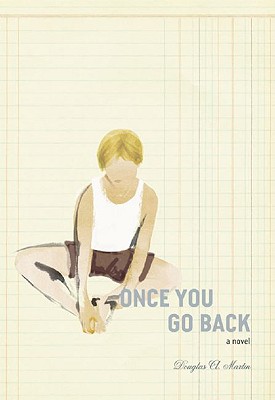 I like the reader to join me and make decisions about what’s happening in the narrative.  I’m at a point in my writing where I’m trying to become more confident with this. I think about Virginia Woolf, how she creates new patterns and meaning-making over time in her novels, even changing tenses in the same sentence in Jacob’s Room. That practice has been lost in literature today.

One thing that exempts OYGB from memoir are the devices I’ve come up with to tell a certain story. [In memoir] there’s a thesis statement and everything rigged to the realization or fulfillment of the thesis. This would be an autobiographical novel. With the word “novel,” I think there’s an understanding decisions are made that replace and refigure truth. I might take liberties with how I arrange information, with what I’m prioritizing—which seems like a fiction-writing endeavor.  But I don’t make anything up.

ZP: The concept of time is played with very interesting ways—in a single paragraph, the speaker will use past, present and future tense—but never in a disorienting or unreliable way. The character is that much more prismatic—he’s nostalgic and prophetic at the same time. What are your thoughts on Time?

DM: I don’t experience my life in one tense. Usually at least two: what’s ahead of me and what has happened before… it’s the degree to which these tenses are felt that set an experience. Truth exists in tension between what I know now and what the character knows in the moment I’m reflecting on.

At many points in the book, I create these metaphors for my writing. I think of a pebble dropping in a body of water. I can choose to follow the surface ripples or I can follow it down, or I can do one and catch up with the other later in time. Both continue to happen; I like the murky area of trying to join the two.

I’ve found that plot is how I move through time and what I’m going to reveal of the bigger picture, at what moment. This is starting to get more complicated in my writing, as I’m becoming more interested in words that I think of as “hinges,” words which can be read forward and backward. I’m wanting new ways to identify with my self, new ways to identify with my characters, and I want to own aspects of my life in less regimented ways.

I grew up in a pastoral setting, alienated from it. I didn’t experience it the same way as people around me. That’s important for me to go back to and reclaim and rewrite.

ZP: Interesting that you say “to go back”—when the title comes up in the book, your house is on fire. This really happened?

ZP: The narrator instructs “Don’t look back at the house.” The phrase “Once you go back” begs for another clause—and the burning house is a loaded symbol. Is that what happens once you go back? Everything bursts into flames?

DM: When I go back to write a moment like that, I can watch it burn from another angle. Now I can give myself that opportunity, when at the time we had to just keep moving. When you read “Don’t look back at the house” —that’s my mom’s voice in my head. I’ve internalized my mom’s voice.

DM: Right! The voices are all internalized, and I’m still pulling them out of me. The drama in each scene or passage depends on how loudly my character hears these voices, and in what manner they dominate his own thought patterns. It also relates to how closely the reader identifies with the voice at any given moment.

DM: My approach to the “You” is an extension of how I began to write the “I.” I realized how nested an “I” can be, how one can force it to work on the page. Everything was circumstantial, whether I was pointing to a first-person character or to myself as author. “You” could reach even further and include the reader, or pull them internally through the text.

I read some criticism about the difficulty of translating Monique Wittig from French because of the many possibilities for the first-personal plural, “on,” one.  One individual, or a universal condition, “one” supposedly unmarked by gender… for me, in English, an equivalent is “You.”

“You” provides similar liberties. The character is created because I can try to make it universal. Any opportunity for me to wake up a reader’s complicity is a good one. I also love that in “You” nothing implies that it’s plural or singular.

The second person has also been an important tool for me in negotiating and transmitting same-sex desire.  It’s incredibly queer to me on some levels.

ZP: That’s a perfect segue into my final question. In this book there’s an ambivalence to call homosexuality by its name. The closest you get is “…to find a place for boys like me to meet boys like me.” Do you not say it outright because of the narrator’s age? Or are you resisting being pigeonholed in “gay literature”?

DM: A bit of both… at this moment, there are things the boy character can’t see or say, because he still doesn’t know what this might mean—to be himself. That’s why the sentence ends with no further explanation.

I am a man who sleeps with men. Though I have some problems with how “man” is largely defined in the common imagination. We’re at a point post-Stonewall where gay means a very specific thing, queer and homosexual mean very specific things. My personal preference is Homosexual because it’s romantic. Until recently, I’ve identified almost exclusively with women. Gender, like sexuality, must have a bell-curve. My overall style strains against self-evidence.

As a writer it’s incredibly liberating to approach autobiography and say, You’re going back to find every most obvious homosexual cliché in your life and try to write about it in a way that feels particular and true to you.

Zachary Pace received degrees from Purchase College and Sarah Lawrence. He lives and works in Brooklyn.