After the economic downturn of late 2008, homelessness numbers increased significantly for 2009. So why are LGBT community leaders doing so little to bring attention to this issue? That’s exactly the challenge that author Sassafras Lowrey is faced with. And she wants action.

There’s a dirty secret in the LGBT community. One we rarely discuss, but one that affects thousands of queer teens every year: homelessness. According to a report by The National Gay and Lesbian Task Force, 26% of LGBTQ youth were kicked out of their homes when they came out. A disconcerting 40% of homeless youth identify as LGBTQ. Further, the American foster care system offers little relief. The Urban Justice League has numbers showing an alarming 78% of LGBTQ youth “were removed from or left their foster care placements because they were un-welcoming or hostile towards their sexual orientation and/or gender identity.” Seventy eight percent!

So while most media coverage focuses on Marriage Equality and Don’t Ask Don’t Tell, the issue of LGBT youth homelessness seems to fall through the cracks. Now writer and activist, Sassafras Lowrey hopes that her new anthology, Kicked Out, can bring a fresh perspective to the issue. 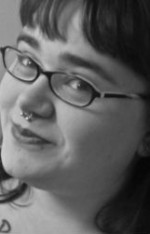 At age 17 Lowrey’s family kicked her out of her home after she came out. As a teen growing up in Clackamas Oregon, she looked to her local library for answers. But resources for LGBT homeless youth were (and remain) scarce.

“There was nothing there that spoke to what I was going through,” explains Lowrey. “I made this promise that if I made it through it I was going to write a book. …Years later, I revisited that dream.”

Recently Lowrey has edited an anthology of 34 essays by current and former homeless LGBTQ youth. The result is a stunning and poignant look at homelessness in the US today.

“The contributors are diverse as the epidemic itself,” Lowrey explains. “They come from every community… It runs the full spectrum from people grew up in ‘dysfunctional families’ to people who grew up in stereotypical, perfect American family.”

Many of the contributors have never published their work before — some hesitated to tell their stories at all. Though the reality of these stories may be hard to grasp, Kicked Out gives readers an inside look at a world that would otherwise be overlooked. Lowrey tells of one young woman named Eternity who wrote her story in a series of 37 text messages, which Lowrey published as is.

“This epidemic does not discriminate on gender, race, class, disability, or geographic region,” Lowrey clarifies.

“Homelessness occurs here in New York City and in the smallest town.” She goes on, “I hesitate to say one experience is easier or harder. There are different challenges in each city.”

The National Gay and Lesbian Task Force says, “LGBTQ youth are three times more likely to participate in survival sex.” “Survival sex,” Lowrey explains, “is one strategy for survival involving the sex industry — either exchanging sexual acts for money or for food and shelter.” These teens’ barriers to health care access make HIV and STDs a particular challenge. 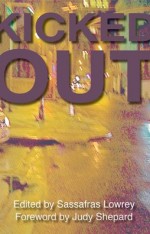 And Wayman knows what he’s talking about. As Senior Youth Policy Analyst with the National Alliance to End Homelessness, he is working to change homelessness through policy and advocacy initiatives.

Regardless of the heart-wrenching tales within, Kicked Out is about hope, Lowrey argues. And the book offers different messages for different users. “For youth the message is survival is possible,” she observes.

The message for parents comes from Judy Shepard – the mother of Mathew Shepard – who writes in the forward:

My son was taken from me because two men learned to hate – I certainly cannot imagine losing him by choice. Our children need and deserve better from us…Our community has a responsibility to take action – immediately. I call on all of us to act today. We must support our LGBTQQ youth. We must talk to our friends and family about the reality facing these young people. We must support these organizations and direct service providers with our volunteer time and financial resources. But most importantly, as mothers and fathers, we need to hug our kids and tell them that they are accepted and loved for who they are – every single day.

“For the LGBT community I hope the takeaway is to take action,” Lowrey says. “This is a growing issue that has been ignored by our community, but at the end of the day these are our kids and if we don’t listen to their stories, if we don’t care for their basic needs, who will?”

"Be Amazing: A History of Pride" as a Gift to My Younger Self
Cutting: On Poetry and Navigating Pain
Read This! Sylvia Rivera's Searing "Bitch on Wheels" Speech