And the award season continues…

Medalists have been announced in the Independent Publisher Award (IPPY) competition, with LGBT authors scoring honors in both Gay/Lesbian and more general categories, such as Erotica and Romance.  In Gay/Lesbian Nonfiction, Perry Brass was awarded Gold for The Manly Art of Seduction (Belhue Press).  In Gay/Lesbian Fiction, Terri Griffin took Gold for So Much Better (The Green Lantern Press).  Click here to see the medalists in all 61 categories, culled from 3,150 submitted titles.

Radclyffe’s Secrets in the Stone (Bold Strokes Books), which was honored with a Silver IPPY in the Gay/Lesbian fiction category, is a finalist for the 13th Annual Prism Award of the Fantasy, Futuristic and Paranormal chapter of the Romance Writers of America (the awards will be announced at the national RWA convention next month).  Radclyffe also won a Silver IPPY in Erotica for Radical Encounters, also from Bold Strokes.

Tom Cardamone’s The Lost Library was the winner in the Gay category at the San Francisco Book Festival.  Honorable mention went to Music Box Danseur, by Marlene K. Slade; Gay San Francisco: Eyewitness Drummer, by Jack Fritscher; and XOXO Hayden, by Chris Corkum. Click here to see all the categories.

Leslie Brunetsky’s Real Country: From the Fast Track to Appalachia (Mill City Press) won the Book of the Year Award from High Country Writers in the Regional Humor category.  Real Country details the trials and tribulations of a big city lesbian couple adapting to life in a log cabin in southern Appalachia. Click here for details.

James Magruder’s Sugarless has been shortlisted for the 2010 William Saroyan International Writing Prize (http://library.stanford.edu/saroyan/shortlistsrelease2010.html). Meanwhile, a Sugarless trailer, directed by Drury Bynum, is a finalist for the Foreward Reviews Book Trailer Contest.

Verse Daily has reprinted Raymond Luczak’s “The Elegist,” a poem from his collection Mute (A Midsummer Night’s Press), as its poem of the day.  If you’d like to know more about Raymond and his writing, please check out this month’s interview, which now runs separately from Book Buzz.

The Secret Lives of Somerset Maugham: A Biography (Random House), by Selina Hastings, got a strong review last month in the Los Angeles Times.  Critic Richard Rayner declares that “Selina Hastings draws upon previously unavailable material to create the fullest, most sympathetic portrait thus far” delving into the life and work of the famous and famously closeted British writer, who died in 1965.

Film rights to David Francis’ award-winning literary suspense novel Stray Dog Winter have been optioned by an Australian production company to be filmed as an Australian-German co-production.

Last year, not long after the unexpected passing of bestselling novelist E. Lynn Harris, Kensington Publishing announced that it would publish a special tribute collection in his honor. Visible Lives (Dafina) is now out as a trade paperback, with contributions from Stanley Bennett Clay, Terrance Dean and James Earl Hardy.

Edmund White, John Giorno, and Perry Brass are among those featured in Fierte Gay (“Gay Pride”), a documentary about the international LGBT movement, directed by Sylvain Desmille.  It will air on June 20, 10 p.m. on French Planete a Belgian channel dedicated to documentary film.

Jeri Estes has drawn on her gritty past in San Francisco’s 1960s Tenderloin—the city’s first gay ghetto, pre-Castro—to write a debut novel, Stilettos and Steel, a noirish tale featuring a lesbian “pimp” and other fictionalized Tenderloin LGBT characters from that era. A video of Jeri discussing the origins of her book with readers above.

Chris Freeman, a past Lammy winner for co-editing The Isherwood Century, has been elected to the board of directors at the ONE National Gay and Lesbian Archive in L.A.  His most recent book is Fine on Acting, written with noted acting teacher Howard Fine. 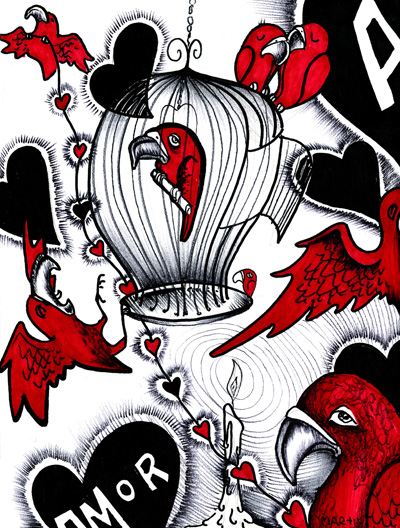 Artist Martin Martinez has created an intricate line drawing, inspired by a poem, “The Sixth Date,” in Steven Reigns’ new collection, Inheritance (Lethe Press).  But there’s a personal note to the story—the poem was itself inspired by a sixth date between poet and artist.  Steven has posted the artwork online, and is using signed lithographs in his book promotion.

Perry Brass continues his “Lost Gay New York” online series with another installment, “The Perils of Perry,” an account of his move to the Lower East Side in the 1960s.  Here’s the link.

Finally:  Steven Reigns, mentioned above, has found an Internet-savvy way to reach the wider world with the acknowledgments printed in his new poetry collection, Inheritance (Lethe Press).  If you’d like, you can check it out on Facebook.  Of course, I’m in the acknowledgments, so this is shamelessly self-serving.

Brief items (no more than a few lines) of LGBT writing and publishing news should go to jmwwriter@aol.com, providing basic information, with a web link whenever possible. No attachments, please. Book Buzz does not cover standard book releases or local author events, such as readings. Please study the column to see what works for Book Buzz.