Christopher Rice in NYC: “My ideas come from the news”

Christopher Rice in NYC: “My ideas come from the news”

Christopher Rice didn’t read a word from his new book, The Moonlit Earth, during his visit at the Tribeca Barnes & Noble on Wednesday, April 14. Reading for his audience is something he gave up during the tour for 2008’s Blind Fall. At one stop, Rice didn’t read, and was later told by one of the women at the event that it was the right choice. “I don’t need anyone to read me the book,” she said.

The idea for The Moonlit Earth started with the desire to do something with a straight woman and a gay sibling. “Coming off Blind Fall I didn’t want to do that level of tension between two characters again. I had to do something softer,” he said. What he ended up with is the story of a woman rescuing her brother who disappears in the aftermath of a terrorist bombing in Hong Kong. 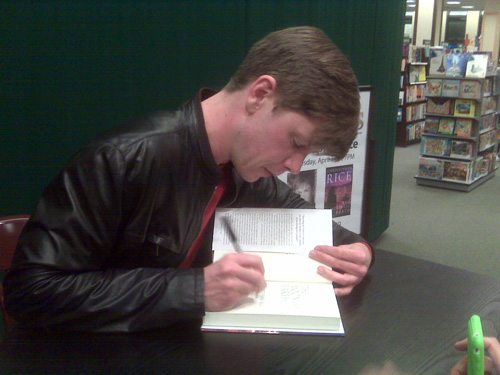 Friends who had been in the Mideast and come back with stories further fueled the plot. More ideas came from current events. “A lot of my ideas come from the news—things that are so disturbing that I have to give them some sort of resolution,” he said. He described his writing process as a way to exorcise the issues from his mind.

Even though Rice was trained in screenwriting, he shuns the idea of excessive outlining.  He writes a rough draft (or what he calls the “burn draft – the draft I burn before anyone else can read it, even my editor”) so he can get everything on the page. Then he can start work on the revisions.

Rice says he didn’t start out to be a mystery writer. He credits Ross McDonald novels with showing him how to write in the genre. “If I had to credit any single writer that influenced me on structure and character, it would be him.”

After 45 minutes of Q&A, Rice settled in to meet the audience as he signed copies of The Moonlit Earth and his other novels.