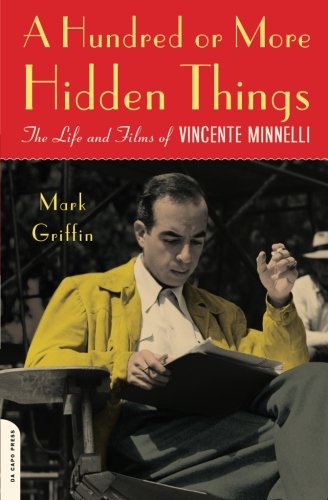 ‘A Hundred Or More Hidden Things: The Life and Films of Vincente Minnelli’ By Mark Griffin

‘A Hundred Or More Hidden Things: The Life and Films of Vincente Minnelli’ By Mark Griffin

Even before he ever assumed the director’s chair, Vincente Minnelli proved himself a master of the illusory.

To begin with, he was not christened “Vincente.”  His birth name was Lester Anthony Minnelli.  Later on, upon embarking on his show business career, he would change the name to “Vincete” (after his father, Vincent) to make himself sound more glamorous, and for an extra bit of mystique he added the “e.”  Another act of prestidigitation involved his age.  In his autobiography, ironically titled I Remember It Well, and elsewhere, he claimed his birth year as 1907, when it was actually 1903; this gift to himself of four extra years would allow his big splash in show business to occur while still a “young man” (although even in Minnelli years, he would be thirty-six before he directed his first motion picture, Cabin in the Sky).  And of course there was the whole matter of his sexuality.

Lester/Vincente Minnelli cut a distinctly effeminate image in the minds of those who knew him and worked with him, and his penchant for wearing makeup — lipstick and eye shadow — in public only solidified the general impression of Minnelli as someone outside the sexual “norm.”  He moved in artistic circles in Chicago and New York dominated by gay men and women.  He was the shining directorial jewel in producer Arthur Freed’s unit of film performers and craftsmen, among whose ranks numbered many gay men and lesbians.  Yet reports of any same-sex relationships remained largely speculative.  There may have been a homoerotic relationship between Minnelli and his co-worker at Marshall Fields, Lester Gabba (a man with whom Minnelli not only shared a first name but a striking physical resemblance as well), but accounts are sometimes contradictory.  Minnelli may have hit on male cast extras and crewmen, but these incidents too are largely anecdotal.  And his first wife, Judy Garland, may have accused him of an affair with her Pirate co-star Gene Kelly, but this accusation seemed born largely out of Garland’s incessant jealousy and need for attention.   Throughout his long life Minnelli managed to maintain a veneer of sexual respectability by marrying four times and devoting his life largely to constant work.

His childhood and young man’s life were archetypal of the sensitive artist.  Born in Chicago, he was brought up in Delaware, Ohio.  Show business was in his blood.  His father and uncle ran The Minnelli Brothers Mighty Dramatic Company Under Canvas, which toured the United States Midwest with musical revues and dramatic presentations.  Minnelli’s mother was the company’s chief actress and singer.  This proximity to performance no doubt influenced young Minnelli; but for him, art had more than a practical value: it was a way to escape what must have been the very dreary confines of Delaware.  At the first chance he got, he left Ohio for his birthplace, Chicago, and took a job at Marshall Field’s designing widow displays.  This eventually led to a sojourn east, to New York, where he created costumes and sets for various Broadway and off-Broadway shows.  His creativity and ingenuity led to directorial stints and smash hits on stage.  With such success Hollywood, naturally, beckoned; the first time, in the form of Paramount Studios, but it was a disastrous, non-productive period for Minnelli, and he would not return to movie-making until MGM decided to take a chance on his unique and distinct talents.  And from The Cabin in the Sky on, he proceeded to compile a list of credits in a number of film genres: musicals, of course, but also dramas, film biographies, and even a Western (Home from the Hills) that would rival in its variety and high craftsmanship even the filmography of a more respected auteur such as Howard Hawks, and eventually lead to Minnelli being awarded the Academy Award for his direction of 1958’s Gigi.

Mark Griffin, in his new consideration of Minnelli’s life and work, A Hundred and More Hidden Things, paints Minnelli as the ultimate introvert and workaholic, someone so devoted to his work he almost did not have a life at all.  Griffin casts doubts on the veracity of much of I Remember It Well and says that Minnelli’s true autobiography may be found in his films.  There are subtexts in the films concerning sexuality, most especially in Tea and Sympathy, the 1956 adaptation of Robert Anderson’s Broadway hit in which a young man is taunted for his effeteness and possible homosexuality and learns to “walk like a man.”  But the fact one gleans over and over from Minnelli’s work is his identification with the outsider, the dreamer, the iconoclast, whether it be Madame Bovary and her constant search for romance and glamour or Vincent Van Gogh and his struggle to achieve artistic perfection in a world in which such a thing is not possible.  For Minnelli, fantasy is always preferable to “reality.”  On this, Griffin comments thusly: “While real life had provided the suffocation of a small town…the movies – even for the man directing them – possessed the power to transport.”  Transport where?  To a world where beauty matters most and comes garbed in impeccable décor and luscious Technicolor, and where a boy can wear mascara without being berated.

Pleasurably paced and always readable, A Hundred or More Hidden Things skims the surface of a very complex subject.  One comes away from the book not totally satisfied, wishing for a more in-depth portrait of the man behind the movies.  On the other hand, such a portrait may not be possible, given that the subject concealed his deepest feelings from even those closest to him.  Minnelli truly did live for his work, so it is no surprise that almost all the chapters in Griffin’s book concern the making of the movies and not the life of the maker.

Randall Ivey is the author of two short story collections, The Shape of a Man and The Mutilation Gypsy and Other Stories. He teaches English at the University of South Carolina in Union.