Ever prolific, Timothy Liu published two books in 2009, one a collaboration with the visual artist Greg Drasler, the other a collection of his own poems. Liu’s work continues its seamless flow of syntax and phrase, his signature style the way the poems tumble forward in an almost Ashbery-ian effortlessness.  Liu is a master of precision, and his oft-commented-upon subject matter demands it. In his approach to sex and trauma, he can be so emotionless as to seem to oscillate between autism and psychosis, but this is what has allowed him to get at his difficult subjects without descending into sensationalism. The power of his work is that he makes his subjects not look difficult at all.

Bending the Mind Around the Dream’s Blown Fuse is a return to many of Liu’s familiar subjects: sex between men in its varied forms; survival in abusive families; travel; disconnection. Liu writes mostly in stanzas that alternate between one and two lines, giving himself a rhythmic surge and retreat that never loses power.  The line itself expands and contracts across the different poems, but never to the point of breathlessness or staccato. Liu experiments with received forms as well—a loose villanelle opposes the war in Iraq and a strict sonnet mourns an obsessive love. One of the most compelling poems in the book is a found poem: “Five Rice Queens.”  Collaged of personal ads, the racially desiring seekers range from the insulting (“be my geisha bun-boy mail-order bride and maybe more!”) to the terrifying (“You be submissive and suicidal.”)  But Liu always lets the experience speak for itself—his tendency to show rather than condemn, shame or critique (let alone tell) is his strength.

There’s something wonderful about the extremes of human behavior that Liu depicts.  I’ll never have the “Kind of night/ you end up snorting a line of coke/ of a stranger’s dick” (12), but I’m glad that someone does. And the focus on sex isn’t salacious, but rather a part of life where everything seems to end up. Liu’s meditative side is equally accomplished, as in the beginning of the poem, “Standing Where the Colossus Stood”:

To be an ancient wonder, you have to be able

to disappear. Take the Colossus: nine tons
of silver transmuted into legendary bronze

that stood for less than a century on an island

to partake in whatever remains of his glory—

The poem ends with a meditation on tourism, and memory, on visiting the ruins with “disposable// cameras and the latest digital technologies// burning our poses into history…” (51).

Liu’s take on “Ozymandius” does include the sexual, but like Shelley before him, he finds that to be small in the face of history is always our lot, and perhaps not a bad one.  Bending the Mind feels like the continuation of what Liu has been doing well for so long.  In his work, the joy in the melancholy of life is always rising to the surface.  And it’s appropriate that this work should return so often to the ancient world, since like Terence, Liu’s motto seems to be that nothing human is alien to him. 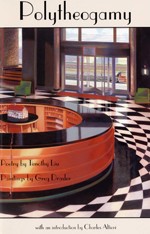 Turning to Polythegamy, we find Liu writing almost exclusively about marriage, sex, and god(s), which the title might have suggested.  This volume is the latest installment of the Saturnalia series of poet/artist collaborations.  Liu’s poems are placed alongside the paintings of Greg Drasler.  The poems and paintings share a kind of film still aesthetic, where you have just enough information to know that something is wrong. The emotional resonance is clear, but the plot is shrouded. A narrative feels about to emerge, but it never quite does, though confusion or disorientation is in itself satisfying as an effect. Charles Altieri describes this quality in Liu’s work as being enthymematic, as being arguments with unstated premises or confusions.  Altieri hits the nail on the head. This is a book where the most exciting hovers on the margin—what is said is thrilling, but even more thrilling is what goes unsaid.

Drasler’s paintings are most often of interiors, usually with hideous wallpaper, or distressing asymmetries and details. The first image of the book is of a room covered in a very busy wallpaper with a vine motif. Elaborate curtains repeat the vine pattern, which seems like it ought to suggest a window, but the curtains only frame more curtains and wall.  Light is entering the room from a window opposite these curtains, and the perspective and framing of the picture never let us see what the curtains are framing (a bassinette?  A small inset bench?).  Many of the paintings feature wallpaper with large patterns, images that would have to be at least a foot large, assuming that the rooms are human sized.  One wallpaper alternates images of a gyroscope, an anchor, and a ball and chain.  I ultimately found the interiors a bit dull—the comparisons to Magritte are obvious, and Drasler does not do well by comparison.  There’s none of the playfulness that informs Magritte, none of the dark humor or rebelliousness.  Also, after a while, I found that the bizarre perspectives feel less like a play with precision and more like a kind of clumsiness.  Much more compelling are the many paintings of—and I think there is no elegant or precise way to say this—film sets of cars that have been cut away to allow for filming.  In Western Cinema, the driving scene, with its patently obvious projected backdrops, has been the only place that mannerist illusion won out over realistic representation.  Drasler’s film sets feel like a double pun:  in his own mannerist style, Drasler depicts the one site of Western cinema’s mannerism.  While many of the canvases feel like tardy surrealist experiments (a dart hanging from a string in a room covered in newspapers; a giant floating umbrella in front of a mobile made of hangers in a room painted like a circus tent; a big door with a smaller door in it, all cut into the wallpaper), the film set car interiors have an obviously staged quality that is inherent to their existence, which creates a little frisson with each viewing.

Liu does not write to Drasler’s subjects, and the mash up is unified by the sense of incompleteness and partiality.  Liu is at his strongest here when working in brief narratives that refuse to fully expose themselves. The poems often generate little scenes that are deeply upsetting, such as this scene from “The Room”:

…so when
The women were brought into the room, all naked

Except for the hoods placed over their heads,
Women who’d been instructed to bend
over far enough to grab hold of their ankles

with their assholes facing you, you wept

for you knew your wife was among them,
and you had to admit it was impossible
to tell which of those contorted trembling forms

Liu ends the poem on that m-dash, leaving the characters behind.  This is the kind of poem that has made Liu so well known.  He is able to write what in most writers’ hands would be pornography, exploitation, or sensationalism. The scenario here is lifted from S&M’s fantasy image system, but played out without a hint of lasciviousness or judgment.  In fact, it’s the matter of factness that makes it so compelling, and the emotional center of the poem stays with the “you”—unable to retrieve his wife, or even tell her apart.  Anonymity is too easily enforced, the poem says, and the degradation that would normally attend hoods and sexual exposure is transferred over to the loss of identity and intimacy.

My least favorite mode of Liu’s is when he writes in single line stanzas made mostly of disjointed phrases or clauses, a form that surfaces frequently in this book. But while they are my least favorite, in this book they compliment the other experiments in juxtapositon that run throughout the project.

Liu’s double act is an impressive one. To have two poetry collections in one year with distinct identities is no small feat. Liu began his career as one of the most promising poets in America. 2010 finds Liu three years away from the twentieth anniversary of the publication of Vox Angelica, the book that won him the Norma Farber First Book Award from the Poetry Society of America. Liu has continued to deliver on the promise of that early volume, his collections growing in lyric intensity and pushing forward the possibilities of his style.  Liu has remained quite clearly himself, pushing his poetics forward while retaining the same obsessions and concerns.

'The Best of It: New and Selected Poems' by Kay Ryan
'Mad for Meat' by Kevin Simmonds
'Boy With Flowers' by Ely Shipley

Jason Schneiderman is the author of Sublimation Point (Four Way Books) and Striking Surface (Ashland). He directs a tutoring center and lives in Brooklyn with his husband Michael Broder. www.jasonschneiderman.net