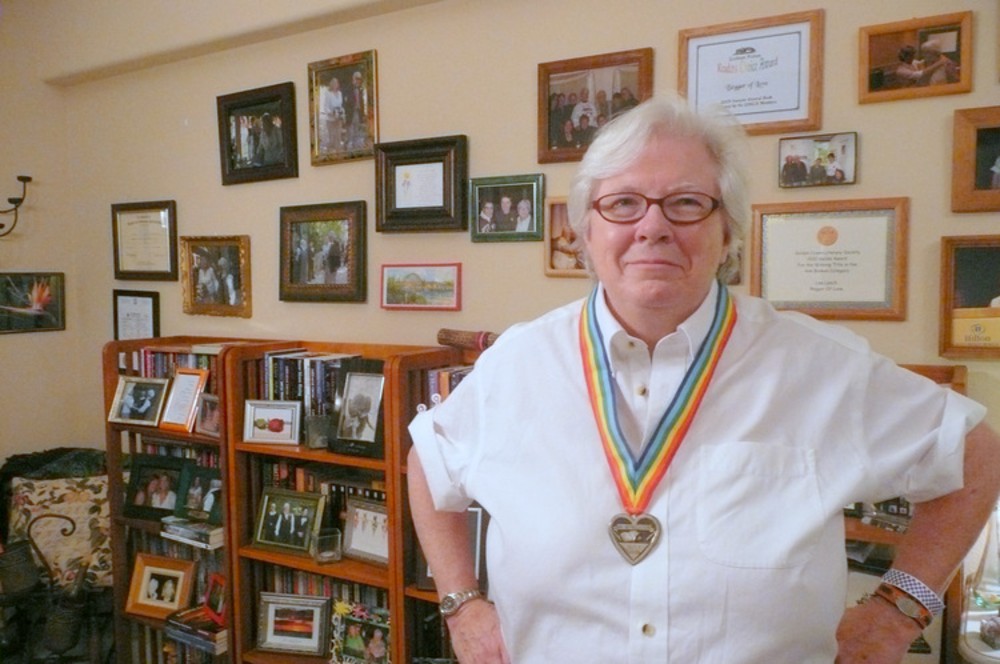 In the late 70s, I studied Women in Literature in a college-level course. I feel cheated that Lee Lynch’s short stories, which appeared in The Ladder, Sinister Wisdom, and Common Lives/Lesbian Lives, during that time, weren’t required reading.  And how much richer the other students and I would have been if her first novel, Toothpick House, had been part of the curriculum as well.

I love this book because it’s not only a love story, but it depicts a slice of history when mainstream feminists had issues with lesbians joining the cause. I’m tempted to quote many passages from the book, but I’ve limited myself to just a few because Lynch’s words have so much greater impact when consumed in context.

Here’s the storyline.  Annie Heaphy is a college dropout who drives a cab to pay the rent. She dares to be different as a woman in a man’s profession, but she wonders when she’s going to feel good. Lynch sums up Annie’s existence in this paragraph: “Sighing, she looked back toward her tiny home, the battered beach-house that was her root as well as her fragile shelter from the world.  Peeled and stripped by salt and wind, it looked from a distance to be no more than a bundle of delicate sticks propped tentatively against one another. It was as bare, as barren as the three lonely willows leaning into the curve of the beach road beside it” [p. 1]. ”

It was sometimes difficult to believe that this was Lynch’s first book because it was so compellingly constructed. It was almost as if she began her career at the top of her game. She effectively employs vivid imagery even when Annie is engaged in such mindless activities such as skimming stones. But Lynch uses these seemingly mindless activities as a means of character reflection. One skip symbolizes her isolated life. Somehow hanging out with friends who Annie considers low-life dykes, and getting drunk doesn’t qualify as Nirvana. Nor does it keep her from feeling alone in an intolerant straight world. When Annie’s spirits lift and her thinking clears, imagine her delight when the stone skips three times.

Annie has her quirks, such as leaving a woman’s bed before the morning officially breaks to sidestep the awkward post-sexual encounter conversation. She avoids relationships because it’s just easier. Another quirk, Annie takes off her cap for no one. But what happens when she meets Victoria Locke, her polar opposite? How can a proper lady, an out-of-her-league Yalie, and the epitome of all she despises, manage to capture her heart and offer renewed hope?  Annie has no idea, but she knows she’s been bitten by the love bug. She’s both interested and scared.

Victoria’s family lives in a Manhattan building with a doorman. She’s been taught to keep up appearances, and has been sent to the college of her parents’ choosing. She’s a shy senior at Yale, who finds little purpose or joy in her life. We see into her soul when Victoria has a brief conversation with the endearing doorman and muses, “I would be as loyal as he is if I had anything to which I could be loyal” (p. 5). She couldn’t foresee how prophetic her thoughts that day would be until she discovers a whole new world of women, women’s libbers, and one Annie Heaphy, who changes everything. Annie is a breath of fresh air in Victoria’s life. She exudes the qualities Victoria has always longed to emulate. Victoria finally lets her long hair down, lets it all hang out, and consequently, she discovers truths about her sexuality and her aspirations. In the bargain, she develops attributes she never thought possible—self-respect, self-reliance, and hope for a future with the love of her life.

Lynch eloquently mirrors what’s going on in Annie’s life where the emotion was as plain as the words on a page: “For Annie, it was a grey week punctuated by the shy swelling of the buds on the willow trees by her house. Their new light greens brought tears to her eyes as she marched past them on her morning walks. They stirred the part of herself that was like them and she wondered if they were altogether happy that now they were committed to leave their warm winter casings and hang all upside down, exposed to the winds and whatever they might bring.”

But falling in love isn’t easy for our heroines in a hostile climate that shuns gays. Lynch’s eclectic cast of characters sets a fast pace and keeps readers’ interest strong while setting thoughts flowing. I was engaged in the characters’ journeys and rooted for them every step of the way. I celebrated as they fought to define their futures, not measured by a patriarchal society but by their own merits. These brave women risked it all to fight for a woman’s right to be treated equally in all realms.  I wondered if Annie was capable of letting love in to stay. I worried that her toothpick house might not be strong enough to shelter her from the storms of life. I hoped Victoria, who embraced her true self, would come out to her oppressive parents.

Toothpick House is a perfect reminder of our past, especially because it gives hope that nothing is beyond our reach. Poetry quoted from the famous poet Judy Grahn is fabulous, but Annie’s reaction to being moved by it is beyond priceless.  I heartily recommend that you read the book so that you can be as enriched by the experience as I was.

When I reviewed Lynch’s The Swashbuckler a while back, I was forever enamored with Frenchy, but now I have a new heroine to admire. Everything penned by Lee Lynch comes with my highest endorsement and complete confidence.

Cheri Crystal is the author of Golden Crown Literary Award Winner Attractions of the Heart and has many published short stories with www.loveyoudivine.com and in several anthologies. Visit her website at www.chericrystal.com or join her on facebook.com/chericrystal for more information.