‘The Art of Jaime Hernandez’ by Todd Hignite; Intro by Alison Bechdel

‘The Art of Jaime Hernandez’ by Todd Hignite; Intro by Alison Bechdel

But Tim Hignite’s retrospective coffee table-tome is filled with mostly fragments of comics, random sketches with little context, and a few old photographs. And then there is Hignite’s text. The first half is mostly biographical, which is enlightening. Then the analysis begins. The nicest thing I can say is that it’s too long by half and repetitive.

As an author I won’t blame Hignite completely. Where was the editor? Hignite thanks the editorial team at AbramsComicArts for being a pleasure to work with. Really? They should have chopped the purple prose to bits. Editing is rarely a pleasure. It’s hard work. The end result is (hopefully) a pleasure to read. The team at Abrams let Hignite and Hernandez down. They should have had less fun and done more editing.

But I said “great” because the book shines a bright light on Hernandez’s comics and graphic short stories. The printing is excellent. The paper quality is sturdy with a matte finishe, just like comics.

It’s also great because halfway through reading the book I was inspired to look for Hernandez’s original “Love and Rockets” books (1982-ongoing).

At Borders, I found nothing. “We don’t have any in the store,” they said. Painful and a sign of the chain’s continued demise. At St. Mark’s Books in the East Village, I found a shelf of various compilations and collections. Fabulous, and another sign of the important role independent bookstores play. 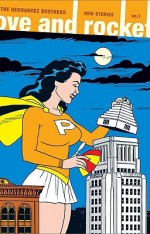 At St. Mark’s I read “Love and Rockets” until my hip cramped. I smiled, I choked up, I lost track of time. Hernandez is an economical writer. He builds character with few words and clean line drawings. He is a satisfyingly but elusive storyteller. He doesn’t give much away. The reader has to work to find the treasures. Hernandez is inclusive, too. His main characters, Maggie and Hopey, are lesbians, sort of. They are not “L Word” lesbians and they’ve never been to Dinah Shore Weekend. Thank god. They’re women, bisexual maybe, complicated. It’s all very vague (Herenandez’s word) and that’s what makes them believable.

Gay and lesbian fans have claimed Maggie and Hopey as their own. None other than the great Alison Bechdel pens a brief introduction about her love of “Love and Rockets.” But based on what I’ve read so far, the queer content is less significant. That’s not to say that when it does appear the queer stories are not poignant (see note above about choking up).

Where “Love and Rockets” truly shines is in the way Hernandez portrays Southern California at the end of the 20th Century. He grew up in Oxnard, far from the klieg lights of Hollywood or the shadows of a palm tree. His portrait of life outside the center (geographically and psychologically) is spot-on. Recent episodes in Maggie’s life show her overweight and working as an apartment manager: all painfully recognizable.

So go find “Love and Rockets,” the original. Fall in love. And then maybe, when you’ve read them all and want to get your hands on anything at all related, add this book to your collection.

Ariel Schrag: On Her New Novel 'Adam,' Writing for the 'L Word,' and Trans Inclusiveness
Brontez Purnell: On His New Book 'The Cruising Diaries,' Silencing the Critics, and the Joys of Writ...
'The Queer Child' by Kathryn Bond Stockton