Michael Kearns: The Activist, The Artist

Michael Kearns: The Activist, The Artist

Beginning in the early seventies with his appearance in the Los Angeles production of Tom Eyen’s The Dirtiest Show In Town, Michael Kearns has been a prominent figure in the worlds of art and politics. Born in St. Louis, Kearns studied acting at the Goodman School of Drama in Chicago before heading to Los Angeles to pursue a career in television and film. Despite some early success in TV, he has devoted himself primarily to the theatre, amassing a virtual library of material — as actor, writer, director and producer — related to HIV/AIDS issues. He lives in Los Angeles with his fifteen-year-old daughter, Tia Katherine Kearns. Michael’s most recent book, The Drama of AIDS: My Lasting Connections with Two Plays That Survived The Plague (Heinemann), chronicles his twenty-year connection with Robert Chesley’s Jerker and James Carrroll Pickett’s Dream Man, two gay-themed plays widely staged in the U.S. and abroad.

JMW: In 1974, you made headlines as the first visible Hollywood actor to truly come out publicly, connected to the publication of The Happy Hustler, the spoof of Xavier Hollander’s best-selling memoir, The Happy Hooker.  How did that impact your career?

MK: The Happy Hustler hoax in 1974, accompanied by my appearance on The Waltons, is officially what brought me out of the closet. Warner Books hired me to portray a fictitious character, Grant Tracy Saxon [the supposed author of The Happy Hustler] in a promotional blitz that lasted two years. While “being the happy hustler” led to some pretty wild acting out (in more ways than one), I have never had a single regret about being openly gay. My career has been affected by my openness, and continues to be, because I’m not demurely openly gay. I’ve always taken the activist role and that makes Hollywood very nervous – still. At some point, it became clear to me that I wasn’t destined to be a movie star; I was destined to be an artist-activist.

JMW: Tell us about The Drama of AIDS and why you wrote it. 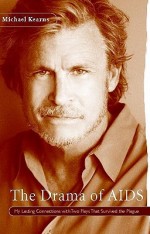 MK: I write to keep from going completely insane. First and foremost, I wanted The Drama of AIDS to be a testament to Robert Chesley and James Carroll Pickett. For whatever reason, I’ve stayed alive and they died tragically young. It felt like my responsibility to chart the amazing endurance of these two significant pieces of theatre (I refuse to call them “gay plays”). It turned out to be the most painful and joyful writing experience I’ve ever had. Those plays are part of my DNA. The book feels like part of my legacy, for sure, but also the legacy of Chesley and Pickett. I don’t believe that a day goes by without my referencing these two men, consciously or unconsciously, in my life and my work. I wanted those intense relationships (in addition to the relationships with Joe Fraser and David Stebbins, the two original Jerker actors) to be recorded and given context in the trajectory of so-called “AIDS theatre”.

JMW: The Drama of AIDS works on many levels – a behind-the-scenes look at stagecraft, a chronicle of artists struggling through the horror of AIDS, an elegy to lost friends and fellow artists, your own personal journey to selfhood and fatherhood, etc. You cover a lot of territory, but rather briefly.  Why only 109 pages?

MK: To be honest, I have another book brewing that will cover some of the same material in more depth. The Drama of AIDS is technically a theatre book (the length was dictated by Heinemann). It is a credit to the publisher and my editors there, Vicki Kasabian and Cheryl Kimball, who allowed the book to evolve in the natural way it did, becoming more of a memoir. The autobiography has been written and has been floating around for a couple of years. I don’t have to tell anyone how difficult it is to get a book published these days but I’m confident that it will happen. I have stories that I want to tell that will go with me to my grave if this “new” book isn’t published.

JMW: Many readers might not want to revisit the darkness and pain of the AIDS epidemic.  As a writer living with HIV, how do you feel about that?

MK: There’s that quote (who said it?) about knowing our past in order to function productively in the present. And I think that means knowing about the darkness and pain of the AIDS epidemic. I also think that my take on HIV/AIDS, which is present in all my work, sheds a lot of light on the subject. As well as humor. As tragic as the plague was, and still is, it is without limitation for an artist in terms of providing a very massive palette. I’m not unaware of the fact that people feel like I’m a broken record, but that’s just the way it is.  I have never catered to being popular (not since The Happy Hustler, anyway). What’s important to me is the truth of the work, period. When I came out of the closet, I had no idea that my work would focus on one subject for thirty years, half of my life. HIV/AIDS has been an amazing conduit to artistic expression. And it will likely continue to be until I keel over. It feels like a calling, a duty, and I am grateful for having that impetus to work and create.

MK: Wow. Well, I definitely write for the ear. The fact that I was trained in the theatre – Shakespeare, Strindberg, Ibsen, Chekov, Williams, Inge, O’Neill – is the reason; I was an actor before I was a writer. This is probably a flaw of mine in terms of writing to be read in print. I often underwrite because I’m acting the words while I write them. Does that make sense? It’s also my strength as a writer, I suppose, because my writing is specific to me and has a tone of conversation. I have developed a style and I am happy with it. My writing is a natural extension of my acting; they are definitely tied together.

JMW: I know that, like so many writers generally, you’ve had difficulties promoting this book.  What have you learned from the experience?

MK: Y’know, I get tired. The book came out while I was doing a twentieth anniversary tour of my show, intimacies. I tried to make the book and the tour work together but they really didn’t because performing at that degree of intensity was draining (I did twelve shows in six cities over a couple of months at the end of last year). The press – gay and straight – does not appear to be interested in this book. The Los Angeles Times has consistently championed my work in the past, but not a word appeared about The Drama of AIDS, in spite of the book’s L.A.-centricity. It’s very frustrating. Frontiers [a local gay publication] – or whatever it’s called now – unceremoniously killed my column last year and didn’t print a word about the book. But I can’t be bogged down by that lack of attention. In earlier years, I’ve been given an enormous amount of attention. Maybe there isn’t enough “space” for me now but that won’t stop me. Clearly. I certainly never thought I’d live long enough to feel the pangs of feeling irrelevant. Feeling and being are, however, two different things. I’m as relevant as I was thirty years ago. Weary some days, but relevant.

JMW: You are indelibly linked to the Los Angeles stage community.  Why did you stay here, as opposed to settling in another major city?

MK: It’s definitely a love-hate relationship. It’s like being with a lover you think is going to change. And, to some degree, Los Angeles – Hollywood, to be more specific – has made enough changes to keep me hot for it. There’s an added layer of determination in the Los Angeles theatre when it comes to GLBT material. Not only is it brave; it is covertly or overtly challenging the mainstream output on the subject. The theatre has consistently led the charge in terms of presenting GLBT stories with authenticity. I’ve been fueled by the outsider status of being primarily a theatre artist in a television-film town.

JMW: You write, act, produce, direct, teach, remain a busy activist and devoted father.  How do you do it?  With your health issues, where does the energy come from?

MK: I’m driven. I’m ambitious. I like to work. I love being a parent. I’m, generally speaking, a person who faces each day with a sense of hopefulness and thankfulness. I’ve been lucky and I take nothing for granted. Every day is to be appreciated. I’m not saying that I’m not sad or angry or depressed – I’m all of those things, but they are overshadowed by some kind of wonder at being alive. Tia has been the single most extraordinary force in my forceful life. Not one aspect of my career is as meaningful to me as being a father. All the losses and the pain of the plague have been mitigated by her day-to-day presence.

JMW: What are you working on now, and what will we see next from you?

MK: I have a laundry list of projects. There’s the extended memoir (Drawing Blood) that needs to get published. I’m writing some short stories, a form I’ve never tackled. I’ve written a play, Comeback, that needs to be produced (either with me or another actor). I’m working with Alex Davis, a transman who is creating a show with music about his childhood and transition from female to male, including his closeness with his dad, the late actor Brad Davis. I’m always involved with the West Hollywood Book Fair. I continue working, through the Los Angeles Department of Cultural Affairs, with women on Skid Row. Then there’s the twenty-fifth anniversary of Jerker. And more performances of Dream Man with [actor] Jimmy Shaw, in America and abroad. I’m also trying to re-enter the mainstream world of television and film.  I’ve done a few indie movies – mostly non-gay roles, in fact – to get back in shape for those mediums. So we’ll see. And I hope I live long enough to be a grandfather. The happy hustler lives to be a grandpa. Yikes!

THE DRAMA OF AIDS
My Lasting Connections with Two Plays That Survived the Plague
By Michael Kearns
Heinemann Educational Books
ISBN: 9780325021591
Paperback, 113p

Confessions of a Librarian: Ellen Greenblatt
Pat Spears: On Tackling Evil and Writing with Compassion
May We Present... Lauren Hough's Leaving Isn't The Hardest Thing