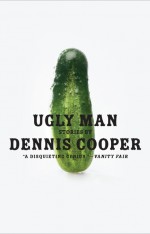 In his twelfth book, Ugly Man, celebrated noir stylist Dennis Cooper treads territory familiar to the many fans of his extremist oeuvre: for instance, Satanism and the kidnapping, torture, sexual assault and murder of teens and young boys. Plumbing these depths, Cooper provides readers with some provocative insights into the human mind and extreme manifestations of fetishistic sexualities, along with surprising and effective doses of grim, surreal humor. But as a patchwork of short pieces stitched together from across over two decades of his career, Ugly Man suffers a lack of cohesion and unevenness in the quality of the work, with complex meditations intermingled with more simplistic works.

Ugly Man is billed as short fiction, and the eighteen works assembled in its pages run from six paragraphs in length to a couple dozen pages. “Knife/Tape/Rope” is the text of a performance piece from 1985, and “Jerk” is the text portion of a 1993 book collaboration with pansexual mixed-media artist Nayland Blake. Several pieces previously appeared as part of an academic volume titled Dennis Cooper: Writing at the Edge that also featured a number of critics assessing Cooper’s work. Also included, as part of publisher Harper Perennial’s “P.S.” promotional feature, is a final section of additional material, including an interview with Cooper and five poems that first appeared in his 2008 book The Weaklings.

Much of the content of Ugly Man is reminiscent in some ways of the work of experimental author Lydia Davis in her book Varieties of Disturbance—not in terms of shared subject matter, but because of the form and brevity of many of the pieces, and the blurring of the lines between stardard short-fiction narrative techniques and seemingly autobiographical elements.

Six short paragraphs, the title story “Ugly Man” is one of the most interesting and provocative in the collection. A man develops a highly contagious and deeply disfiguring medical condition that will kill him in three months or less. He dumps his lover, who he’d been paying to stay with him anyway, once the man can no longer muster an erection as the sick man’s skin begins to peel away and his fingers fall prey to unsightly swelling. He hires teen hustlers instead, gratifying an unstoppable urge to rub his diseased body against healthy, silky young flesh.

As it turns out, his condition is highly contagious, easily spread by the most casual of physical contact. He’s conflicted about condemning these sex workers to the same medical fate, but in a final twist, he suggests he thinks the boys may actually intuit what they are in for, imagining a deathwish on the part of the young whores. An unsubtle and unsettling re-imagining of HIV/AIDS, the messages of “Ugly Man” go against everything that the emerging queer health movement has to say about stigma, responsibility and mutual respect. Simultaneously, they make the reader reconsider the impact of destructive impulses upon queer sexuality and the intransigent linkage of Eros and Thanatos. Is Cooper reflecting upon a single person, all men who have sex with men, or the human condition more generally? This theme is picked up more overtly in backmatter poem “The jpegs,” which cleverly takes apart internet-based “gift-giver” HIV fantasies.

Some of the shorter pieces are the most effective. “The Worst (1960-1971)” is a first-person narrative in a spare, haunting voice, about someone who experienced a series of brutal, ultra-violent events between the ages of nine and eighteen. “Santa Claus vs. Johnny Crawford” is a single-paragraph exploration of a young abuse victim’s coping strategies in the face of sexual manipulation, crystallizing a theme that recurs in the book again and again.

“The Brainiacs,” a snapshot of a group of skateboarders who get stoned together, is a five-page respite from the rape and murder so prominent in the other stories, showcasing Cooper’s gift for dialogue and authentic capturing of the voices of male and female teens. “Knife/Tape/Rope” also examines teen life, in this case the lives of a group of young Satan enthusiasts who murder a friend named Steve. According to one of them, “Satan looks like Dom DeLuise if Dom DeLuise was scary looking.” In an entertaining twist, Steve communicates with them from some other astral plane post-murder, letting them know relative unimportance of the devil in the grand scheme of things.

“Oliver Twink” is a very lengthy dialogue between a teen junkie and the kidnapper who is feeding his habit and pretending to be his uncle. The uncle loves the junkie, but also wants to murder him, and has held back from forcing himself on the boy sexually. This is discussed in elaborate detail. Seen in the context of the balls-out carnage of the other stories, the moral equivocation of this narrator is almost grating.

Cooper’s exploration of debased and suspect perspectives is not for everyone. One story, “The Hostage Drama,” features the last words of a teen who is held hostage and repeatedly violated. The teen had a twelve-year-old effeminate brother whose best friend was an eight-year-old who, the teen suggests, was supposedly so fascinating he could turn any male into a pedophile. By the end of the story, all the boys are dead. Each of the signature themes of the book—intentional brutality, sexual manipulation, youth exploitation, abuse of power, disordered thinking, extreme violence—is present in five short pages.

Shawn Syms has written about sexuality, politics and culture for over 20 years. His short fiction was recently nominated for the Journey Prize.