'The Mere Future' by Sarah Schulman

'The Mere Future' by Sarah Schulman 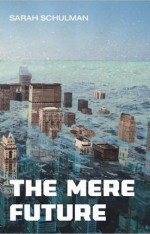 “Prolific” is almost a default description of Sarah Schulman, the author of 13 books, numerous plays, and a significant body of journalism, and yet between 1998 and 2007, no one would publish her work. Thank goodness—though as Schulman reminds us in her latest book, goodness has nothing to do with it—the products of those wilderness years are now becoming available. In September, Arsenal Pulp Press released the novel The Mere Future, and in October The New Press published Ties That Bind: Familial Homophobia and Its Consequences, a polemic that could revolutionize the way we conceive of anti-gay oppression.

Both these books were written in that period of exile, and yet they are shockingly of the moment. The Mere Future is set a few years hence “when things are slightly better because there has been a big change,” and, as she always does, Schulman fashions a writing style that suits the setting.

New York City, where the book’s narrator and her lover Nadine live, has been transformed by the election of a new mayor, Sophinisba Breckinridge.  In Sophinisba’s new order, everyone has an affordable home big enough for their needs; a minimum wage means that “every single person could go to the dentist, have a vacation, and save up for a dream”; chain stores are outlawed; and unemployment is a thing of the past. Sophinisba was elected on the slogan “Conceptualize Beyond Your Task,” and the reader slowly realizes that in this new world, language is limited to the cadences of advertising jingles, magazine headlines, and catalog copy.

One of the rewards of reading Sarah Schulman is seeing the evolution of her ideas. Back in her 1998 nonfiction collection, Stagestruck: Theater, AIDS, and the Marketing of Gay America, she wrote, “It is normal for people’s most private conversations about love, desire, and loyalty to include phrases and slogans gleaned from ad copy.” In The Mere Future, we hear those conversations and witness well-meaning characters attempt to explain an artist’s life and work in eight words or to struggle with “the strife worth living” —which the narrator defines as “1. communication; 2. negotiation; 3. reconciliation; 4. healing”—when their vocabulary has been reduced to the lexicon of sales and campaigns.

This produces what is probably Schulman’s funniest book, at least in the early pages that are full of hope and audacious optimism. In the book’s final third, I found myself longing for the linguistic playfulness that faded in the denouement. Slogans are seductive, after all, and catchphrases are by their nature catchy.

June Thomas is the foreign editor at Slate magazine. She has worked at feminist bookstores, publishers, and magazines.