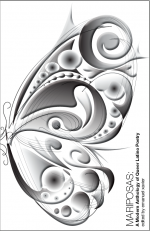 Although Cuban-American Rafael Campo is a much anthologized, multiple-award winning poet and author, it remains difficult for openly gay Latino writers to be published, and challenging for readers to discover their work. As poet (Pier Queen, Americanos) and novelist (Christ-Like) Emanuel Xavier notes, “There have been many books gathering voices from the Latino experience but very few specifically celebrating the queer Latino experience…the purpose of this collection is to open the doors of communication and add more pages to our rich history.”

The collection can be seen as a brother to Xavier’s previous anthology, Bullets & Butterflies: Queer Spoken Word Poetry (2005) in that many of the 17 authors presented here like Dino Foxx, Andres ‘Chulisi’ Rodriguez, and the editor himself, are from the world of ‘slam’ or ‘performance’ poetry. But Xavier extends the range of the previous volume by adding more established and multiply-published authors Francisco Aragon, Rane Arroyo and others into the mix, as well as giving exposure to newer voices. The poets here, mainly of Puerto Rican or Mexican decent, represent the New York City area, California, and Texas, centers of Latino culture in the United States. Xavier is also to be commended for introducing two Argentinean poets he discovered in his travels, Walter Viegas, and Pol Ajenjo, thereby extending the conversation to the international level. Their poems appear only in Spanish; one wishes they had been translated into English to increase their accessibility. Other poets’ work in Mariposas appears in English, Spanish, or ‘Spanglish,’ and several have been translated either into English from Spanish or visa versa.

Common themes also emerge, connecting the authors beyond their mutual queerness (Xavier uses ‘queer’ in this case because some the writers identify as bisexual, and the work itself does not always reveal it author’s sexual orientation). Notes of anger mix with the reclamation or redefinition of derogatory terms, as in Xuan Carlos Espinoza-Cuellar’s ‘Wetback’

Call me tired back,
Tired of building houses,
The great structures of America,
Tired of being stepped over,
Humiliated, exploited, discriminated

***
Call me strong back,
For I am the back that carries America
To the future

Sexual desire is a recurring theme as well. In Lorenzo Herrera y Lozano’s Prince-like ‘Psalm 69 (Unmastered),’ for example, the poet addresses his lover in terms mixing religion and sex, wishing to

Another issue for many of the authors is ethnic pride, and questions of how they fit into their respective communities as queer Latinos or members of an urban community removed from their ancestral homelands. Robert Ortiz, for example, asks the Puerto Rican community,

! Yo soy Boricua! ?Y que?
Just because I don’t have the right acento
Or callos on my feet from walking around the campos
Or know how it is to live as a jibarito
Does that make me an automatic gringrito?

As much a political act as poetry anthology, this passionate and truth-filled collection might at first seem to appeal more to fans of Spoken Word poetry. However, everyone interested in broadening their understanding of the diversity of the gay and lesbian community would do well to read Mariposas as well. As Emmanuel Xavier writes, “These poems are personifications of our souls and like mariposas, we will continue to survive and pollinate with our words, whether in English or Spanish or Spanglish, for years to come.”

Vulval Chaos: The Poetry of Susan Hawthorne
Ten Poems by QPOC You Really Should Have Read This Year
'Collateral Light' by Julia Cohen