'Got 'til It's Gone' by Larry Duplechan

'Got 'til It's Gone' by Larry Duplechan 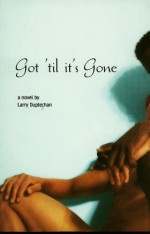 So, here’s the thing: I am forty-eight years old. In less than two years, a year from this Christmas I’ll be fifty. Now, you may have heard how fifty is the new forty. This is (as they say in the scientific community) a total crock. You know who made that shit up? Somebody who’d just turned fifty. Fifty is fifty. It’s middle-age, big-time middle age, and that’s if you’re planning to live to be a hundred.
—from “Johnnie Ray Rousseau’s Theory of Urban Gay Male Aging” (Got ‘Til It’s Gone by Larry Duplechan, page 17)

Now a legal secretary on the cusp of 50, beset with unexplained pains in some very sensitive areas, and going to gym in an attempt to bloom into full blown Daddy status, the African-American Rousseau seems content to live with a series of recurring sexual partners, until he hooks up with the white, and white-hot, 20-something Callahan on line, and later in the real world. The HIV+ Joe (porn star name Joey Lee Turner) has a fixation on angels, and shares with Johnnie Ray a love of trading quotes from classic movies (particularly Stage Door). The sex is great; their passionate relationship seems to be going well, but how long can it last? And what’s up with all the attitude from Johnnie Ray’s sometime fuck-buddy, Dre, a black dancer, choreographer and occasional usher at Johnnie’s “Gayer than Cher tickets and a bottle of silicon-based lube” First Assembly of God church?

In addition to dating Joe, Johnnie Ray has to deal with the failing health of his mother, Clara, who has been diagnosed with a brain tumor. In the face of his mother’s mortality, Johnnie Ray reflects back on his own life, the loss of his previous lover, and his future chances for love with Joe. The scenes of Johnnie Ray’s relationship with his mother, and his attempts not to get aroused by her second husband, the bear-like Dr Weinberger, are the most tender, heartwarming, and moving sections of Got ‘Til It’s Gone.

Large scale tragedies recur in the world outside the novel, from 2004’s Indian Ocean tsunami to Hurricane Katrina in 2005. Although Johnnie Ray’s family is from Louisiana, these events are mentioned in passing, external metaphors for the personal dramas in Johnnie Ray’s life but with little real impact on him and those in his world.

The first group of novels featuring Johnnie Ray Rousseau came fairly quickly in the 1980’s (Eight Days A Week, 1985; Blackbird, 1986; Tangled Up in Blue (1989). Got ‘Til It’s Gone is such a smooth and very self-assured return for Larry Duplechan it is difficult to believe that there has been such a long break between this and his previous novel, 1992’s Captain Swing. Sure to please new readers and old fans alike, the brisk, serio-comic style of Got ‘Til It’s Gonemakes it clear that both Johnnie Ray and Larry Duplechan have ‘still got it’ after all these years. Betraying no sense of a slump, or feeling of forced writing, it seems they’d never left. One hopes there we will not have to wait another 15 years to read of his next romantic adventure: Johnnie Ray – When you comin’ back?

The Death of Vivek Oji is a Mosaic of Love, Pain, Community, and Beauty
'I Loved You More' by Tom Spanbauer
Radiant Fugitives: A Family and Country Test Their Capacity for Change