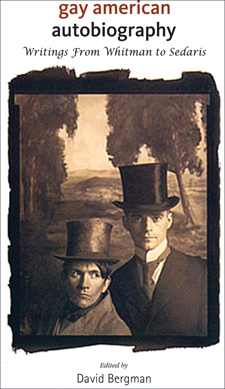 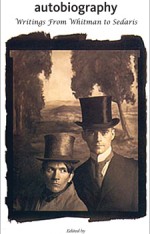 It’s got everything, almost, this painstakingly inclusive anthology hosted by David Bergman, earnest pioneer in unearthing disregarded gay and lesbian autobiographical writings. The jacket copy can’t be improved on: here’s “a diverse array of American men of African, European, Jewish, Asian, and Latino heritage,” with “tattoo artists and academics, composers and drag queens, hustlers and clerks,” plus some classic historic and modern authors for ballast. Amid the debris of societal disapproval, medical tragedy, and plain old bad luck, it leaves out no man, even those rare souls who managed to be not only gay but happy.

Thoreau makes a strange forebear. His austere examination of the sheer difficulty of existing in this world, much less of engaging significantly with his fellow men, is highly emotional yet paradoxically asexual. The ardent letters Henry James wrote in his 60s to the grandiose and impractical young sculptor Hendrick Andersen present him as more of a huggy uncle than a would-be lover; Whitman’s “adhesiveness” for his younger “comrade” Peter Doyle goes only a few inches further.

Unfamous authors from the turn of the twentieth century tend to be college men. The crush which lifelong D.C. resident “Jeb Alexander” had on fellow student “Dash” is recounted with aching vividness. Given the adventures chronicled by Earl Lind (aka Jennie June) in Autobiography of an Androgyne, the wonder isn’t that this grad student’s “babyish” come-ons got him beaten and caressed, or vice-versa; it’s that they didn’t get him killed. The rewards for non-repression must have been mighty.

“Underknown” might best term characterize the fascinating love letters of Rat (painter Russell Cheney) and the Devil (influential critic of American literature F. O. Matthiessen). Bergman does good service restoring samples to print. Alas, Cheney’s alcoholism and death were followed by Matthiessen’s suicide, once he was outed as homosexual and former Communist sympathizer; and yet they were happy together, for a time.

Tireless promoter of American ballet Lincoln Kirstein poignantly recalls trying to achieve Six Degrees of Kinship with dead poet Hart Crane through Crane’s friend (and would-be writer) Carl Carlsen; but neither the attempt nor the shapeless reminiscence succeed. Samuel M. Stewart spins a funnier yarn: he not only beds old Lord Alfred Douglas, but makes us chuckle at the pious hope that doing so might mystically transfer something of Oscar’s genius.

This flash of humor makes you ponder why a fortunate few have little trouble finding their niche. In an engaging unpublished essay, Edward Field recalls how easily and how much he enjoyed being “Gay in the Army” during WWII. And female impersonator Minette, whose career as “a part-time lady” spanned vaudeville and burlesque through post-Stonewall off-off Broadway, kept cheerful through his/her willing ability to change with changing times.

Compare Martin Duberman’s painfully documented purgatory during the mid-1950s, when therapy was de rigueur and many “inverts” believed, hoped, or feared that a stranger could talk you straight. The best writing here is the most keenly specific: Michael Rumaker applying high verbal polish to A Day and Night at the Baths; John Rechy flaying phones trying to co-opt his “sexual outlawry” (they may not deserve such contempt, but boy can you visualize them); Andrew Holleran celebrating the characters who populated his singular corner of “My Harvard”; and Paul Monette, knowing well where his steps were leading him, taking time to praise his dog Puck, who thought he ruled the world. Yet few of these men risk trying to stir the reader’s sensuality, except for—transgressing every taboo of his time and place—the elegant, late Essex Hemphill. Even with those witnesses for whom the personal is all the politics that counts, there is little enough to be “gay” about.

Other famed authors reveal hearts chipped from ice, followed by latter-day grudgeholders and gossipmongers, then misery memoirists whose work reads like parody: Any shit you’ve suffered, I’ve suffered worse. Ever felt trapped at a party where all you can smell are males as self-absorbed as their straight counterparts? It makes a guy yearn for mixed company.

Gay American Autobiography is well-produced and well-proofed; the typeface may be a tad small, to pack as much as possible into 400 pages. As Richard Canning (editor of the forthcoming Fifty LGBT Books You Should Read) says, “No other book has spanned the last 150 years of material in this way.” True; and David Bergman (whose Men on Men 2000 won the 2001 Lambda Literary Award for Best Literary Anthology) can take pride in a project useful for making you think. But the overall effect is downbeat. Is this just an indictment of the society in which these writers were immured? Or the happenstance of this particular selection? More likely a combination of the two, plus something else: can anyone, especially if gay, expect to be happy, and earn This World’s approval as well?