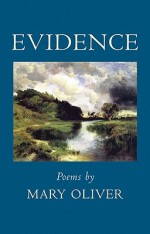 Mary Oliver’s new collection of poetry, Evidence, continues her exuberant engagement with the natural world. Lovers of her poetry will be satisfied deeply by this collection. Although it lacks the consistency of earlier collections, particularly Twelve Moons, the Pulitzer Prize-winning American Primitive, and Dream Work, Evidence delivers keenly observed poems of the beautiful and the sublime in nature. Two things emerge in Evidence that are emblematic of Oliver’s recent work: a whiff of politics and the continued grappling with religion and mortality.

Only a whiff of politics because, while Oliver has been read as political, particularly in relationship to feminism and deep ecology, she is, by standards of contemporary poetry, not political. Yet Evidence suggests more political engagement, especially in relationship to environmentalism. In “With Thanks to the Field Sparrow, Whose Voice Is So Delicate and Humble,” the speaker begins,

I do not live happily or comfortably
with the cleverness of our times.
the talk is all about computers,
the news is all about bombs and blood.

The poem concludes after an encounter with “four warm, speckled eggs” when the speaker feels “something more wonderful/than all the electricity of New York City.” Oliver contrasts the natural world with the human world and finds the human world lacking. This is not a new theme, but her tone and address are more direct, more urgent.

Similarly, in “Landscape in Winter,” Oliver writes of the carrion crows, who say “Death has happened,” then “And this is good for us.” She indicts humanity in “Meeting Wolf” reflecting on the intrusion of people into the world of the wolf. “He has given me/a glimpse into a better but now broken world./Not his doing, but ours.” In the title poem of the collection, Oliver opens with a nod to people who have no address and in the conclusion of the poem, as Oliver contemplates her own mortality, her political intentions are clear. She writes,

Oliver’s political message is related intimately with the natural world, here the rising of the weeds, but her intentions to speak about the world of money and the economy, the political world, are clear as well. This is a new direction in Oliver’s work, one I appreciate and read with interest.

Oliver’s work has always been religious in its sense of wonderment but since Thirst, Oliver’s religious engagement is not simply an amorphous nature-based spirituality, but rather a true engagement in contemporary religion, particularly Christianity. The poems of Evidence invoke the Lord; Oliver writes of a ceremony in San Miguel de Allende with Christ carried on the cross; titles include “Prayer” and “Halleluiah.” Yet Oliver writes religion with skepticism. She says in “Almost a Conversation” of the other, “He does not wonder who or what it is that I worship,” as though religion were unimportant to the world that is primary for Oliver. Briefly and elegantly, she writes her doubts about heaven in “Empty Branch in the Orchard,”

There is a certain commitment

that each of us is given,
that has to do with another world,
if there is one.

Oliver’s religion is present in this collection but there are more trees and geese and mockingbirds than deities or orthodoxies.

Oliver’s first book of poetry, No Voyages and Other Poems, published in 1965, was received with great interest by Barbara Grier and other lesbian critics in The Ladder, the newsletter of the Daughters of Bilitis. Grier, using the nom de plume Gene Damon, described Oliver’s poems as having “fire and vigor” as well as “technical virtuosity.” Another review likened Oliver’s first book to Edna St. Vincent Millay though said that Oliver had “a fresh, tangy, modern tone” and was a poet “we will hear more from. . .and it will be worth listening to.” These readers knew that Oliver was an important poet – and that her work was filled with Sapphic undertones.

Nearly forty years would pass before Oliver would write openly about being a lesbian, and, when she did, the revolution of gay and lesbian liberation had created a society in which Oliver’s openness would not diminish her large following of readers or her wide-spread popularity. Although there is little in Evidence to suggest that the moniker ‘lesbian poet’ should be used to describe Oliver, her popularity as a poet and her ability to draw new audiences makes me insist on reading her as Mary Oliver, lesbian poet. In Evidence, it is pleasurable reading.

JULIE R. ENSZER is a poet and writer based in University Park, MD. You can read more of her work at www.julierenszer.com.