‘The Story of a Marriage’ by Andrew Sean Greer

‘The Story of a Marriage’ by Andrew Sean Greer

The Story of a Marriage is about a bisexual love-triangle set in 1950s San Francisco. Pearlie and Holland, high school sweethearts who rekindle their relationship after World War Two, have settled into a fairly typical nuclear family scenario. Their son suffers from Polio and they are poor, with Holland’s twin aunts helping out with the bills. All seems normal, if in a rut, when Buzz, an old wartime friend of Holland’s shows up on their doorstep. Buzz’s arrival seems to inject life back into the household. After spending a few months insinuating himself as the family’s best friend, he reveals to Pearlie why he has really come: to take back his lover, now her husband, which he wants her help to arrange. In exchange, he will settle most of his wealth on her, enabling her to provide more for her child.

Andrew Sean Greer is a true literary novelist well versed in his craft. Where this novel succeeds is as a showcase for his considerable skill. The story unfolds in layers, like a flower of overlapping petals slowly opening petal by petal. Greer is totally in control of what he wants you to know. The story moves forward, then backwards in time, revealing bits of information specifically designed to reverse the reader’s perspective on a character, after being deliberately sent in the wrong direction. Perhaps this strategy is to create in the reader an experience similar to the shock Pearlie must have felt when she discovered her husband was far different from the man she thought she knew. 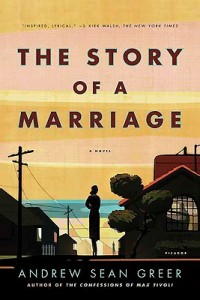 Greer can drop in a seemingly innocent detail that later becomes a major plot point. He creates suspense by foreshadowing with themes of neighborhood gossip and tales of dangerous affairs snaking through the story. He delights with a beautiful turn of phrase and adds touches like making Countee Cullen the husband’s favorite poet–a wink of the eye to readers who know that Cullen was bisexual and a married man. We feel that we are being drawn towards the heart of a fascinating story, blooming with possibilities and brimming with drama. Unfortunately, it never fully delivers.

The Story of a Marriage is not only set in the 50s but seems as though it was written then as well. For a story about a bisexual love triangle–it is surprisingly devoid of sex. But the biggest mistake the author makes is avoiding the most interesting character in the novel: Holland, the bisexual husband torn between the woman he left his boyfriend to marry and the lover he is considering leaving his wife for.

Pearlie is the story’s narrator, and although we are privy to her thoughts, it’s unclear as to why she goes along with interloper Buzz’s plan, without even speaking to her husband. All her conversations about the possibility of Holland leaving her are with Buzz. Through those dialogues we know that Buzz is passionate about getting Holland back, but we don’t know how Holland feels. We don’t know why Holland never wrote to Pearlie after he left for war, why he left Buzz to marry her two months after meeting her again or why he is now considering leaving his wife to return to his lover. When he left Buzz and married Pearlie, was he trying to marry the gay away? Or did he love Pearlie more? When Buzz tracked him down four years later, why did he consider leaving, even though he now had a wife and child? Why did he want to stay? Was he more in love with one than the other? Pearlie and Holland’s motivations are obliquely hinted at but never defined, since they never discuss their marriage.

Why Greer made the choice to leave out the most interesting perspective on the story is a mystery. Instead of mining the thoughts and feelings of the character at the fulcrum of the drama, or mining drama from the conversations that Holland could have had with his wife and his lover, all the conversations about the impending decision are between Pearlie and Buzz, with the drama confined solely to finding out the answer to the question, “will he stay or will he go?” Although we eventually find out his decision, we are never privy to his reasons or his feelings about what he gave up. Not surprisingly, the possibility of them staying together as a threesome was never explored, even though all three seemed to be having the most fun when they were together.

It is also odd that there is no indication that most of the characters are black until it is suddenly dropped in, 48 pages into the story. After that, issues of race are addressed, but it seemed like it was deliberately held back for shock value, rather than to make a political or social point. The Story of a Marriage is a masterfully well-crafted, but ultimately, unsatisfying story.