Poet, writer, and social theorist, Judy Grahn has been working in liberatory movements and communities her entire life. It may be impossible to overestimate the importance of her work to lesbian-feminism, the women’s print movement, and the movement to reclaim feminist spirituality. Her early poetry imagined a world of new possibilities for lesbians and her work brought those possibilities into being in the world. Grahn was one of the founders of the Women’s Press Collective in Oakland, CA, a press central to the publication and distribution of feminist and lesbian-feminist poets and writers.

Grahn’s work has sustained many decades with a prolific publishing career in small and alternative presses. Her books include Blood, Bread, and Roses: How Menstruation Created the World (Beacon Press, 1994), Another Mother Tongue: Gay Words, Gay Worlds (Beacon Press, 1985, updated 1990), Highest Apple: Sappho and the Poetic Tradition (Spinsters Ink, 1985), Mundane’s World: A Novel (The Crossing Press, 1990), The Queen of Wands (The Crossing Press, 1982), The Queen of Swords (Beacon Press, 1989), She Who (The Women’s Press Collective, 1977), and Edward the Dyke and Other Poems (The Women’s Press Collective, 1971). Judy Grahn currently serves as Associate Core Faculty Women’s Spirituality Master’s Program at the Institute of Transpersonal Psychology in Palo Alto, California and teaches in the Writing, Consciousness, and Creative Inquiry interdisciplinary program at the California Institute of Integral Studies. Her new book is love belongs to those who do the feeling: selected poems (Red Hen Press, 2008).

What prompted this new collection of your poems?

Kate Gale from Red Hen fell in love with the Queen of Wands and wrote about it as part of her dissertation. She works closely with Eloise Klein Healy who a marvelous poet in Los Angeles and a friend of mine. Kate suggested putting these books back into print, so I suggested a collection of the short poems to showcase the lyricism of them.

Your poems have circulated widely. What has been your favorite adaptation or public engagement of your work?

There have been some really amazing things – more than I can even list. In the 1980s, the bulldyke poem [“I am the wall at the lip of the water”] was graffiti-ed on a highway in England. In Buenos Aires, a group of newly organizing lesbian picketed on the Plaza de Mayo with a picture of me along with mothers protesting “the disappeared.” A sculptor did a beautiful piece called She Who. It is installed outdoors and it is a moving sculpture that interacts with the wind. I just love that. Then there is all of the music, drama, the plays and everything.

When I was writing the poems, I wanted that, of course. I wanted the poems to speak to people, but you never know if that is going to happen, and then it does. It is lovely.

There are some significant exclusions from this collection–“A Woman Is Talking To Death,” in particular. What were the reasons for that?

love belongs to those who do the feeling is a collection of short poems. “A Woman Is Talking To Death” is a nine-part poem, and I have identified five other ones that I have written. I intend to do two, and hopefully three, more and put some essays with them; then Red Hen might publish those as a group as well. 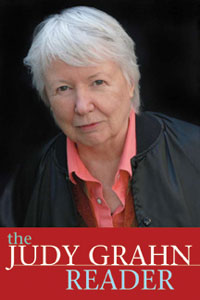 “A Woman Is Talking To Death” is going to be included in a collection of prose, fiction, and poetry coming out of Aunt Lute press. The Judy Grahn Reader will be published in May 2009.

How have your readers and audiences changed since the early 1970s?

The work just started so wonderfully in the gay women’s liberation movement then the lesbian-feminist and feminist movement and the gay men’s movement took it up. It has been like ripples. When I went to south India the first time, I was invited to read at the local college. A member of the audience came up and said she had just used one of “The Common Woman” poems in her master’s thesis. I was surprised; it is not as though the work has been that much above ground. It has spread by word of mouth or through anthologies. And there it was in India!

Since then I’ve had poems translated into the Thai language and many other languages. The web has made a huge difference. I go online and read that a punk rock band was using the first part of “A Woman Is Talking To Death” as part of their lyrics. I am so heartened that the content embedded in a poem along with the form remains powerful for a generation and then the next and the next. It spills out to all kinds of people. I got letters from my own great-aunts about Queen of Wands. It became no longer an enclave or a taboo genre. Now I am meeting people who were raised knowing my work from their mother’s knee.

All kinds of people have reverberated to Another Mother Tongue who aren’t gay. It continues to go out. It is just like riding a magic carpet. To watch it all happen and witness it. I am a vehicle. I try hard to have it be powerful and long-lasting and everything else is up to the people who make use of it. They never fail to astonish and to teach me.

Tell me about the epics? What draws you to that form?

I started working on the epics in 1979. Well, I wanted to. I thought that I still had a lot to say, and I wanted a vehicle that would allow that to happen. I took a class from Bella Zweig (at that time–she has since changed her name) and she had done research at Stanford that Helen had been a goddess in some of the Greek mythology. I started to explore it, and I realized that research is something that I adore doing. I have been given gift after gift of the ancient literature of the star goddesses and especially Venus. I couldn’t tell you why, but I just adore working on it. Helen is an interesting character–really powerful and totally heterosexually acceptable sometimes, and at other times she is down at the bottom and reviled as a prostitute. So she has an outlaw sexual definition and overlaps with war and warrior stories that I find intriguing. In this next epic, there are things coming out from the Gnostic Gospels that are entrancing.

Formalism has a significant root in all of your work. You describe “The Common Woman Poems” as Americanized sonnets, for instance. Are there observations about form you made while putting the book together?

I wanted to put the short forms together so that we could see them. I think it is easy for “A Woman Is Talking To Death” to lope through like a gigantic horse and carriage and sweep a sensibility in a particular direction. This book brings the lyric into focus.

Forms are something I studied a lot as a child. I was playing sports and studying poetry as hard and fast as I could from the age of ten. My father loved poetry and so did I. I studied the English and American forms. Edgar Allen Poe was one of my heroes. I developed my ear for poetry by reading, and then I would attempt to write ballads and long narrative poems that rhymed. I think of them as sprawl-y sonnets.

In She Who I was also looking at form and paying attention to breath and rhythm. I would try to change the way I walked to change something in my brain so I would have some different rhythmic forms. I wanted to express women’s rhythmic experiences in different ways.

In the introduction, your kinship with Marge Piercy’s work is evident. (I think in particular of her poem, “To Be Of Use,” but of her work more broadly as well.) What contemporary work do you find notable and/or inspiring?

I am reading very locally, and I always study the ancient texts. I read a great deal of non-fiction. I read my students work and I always learn from them. I listen a lot to people’s stories. So I sort of absorb them. It is very moving to work closely with students and help guide them into turning the stories that they want to tell into something that is real. Frequently this goes to something very personal in their lives. That keeps me real.

I go online and read leftist articles and the testimony of soldiers coming from Afghanistan or Guantánamo and very bravely wanting to say what they have gone through.

Or I will read things for classes that we teach at the school. Epic poems from south India that were first written down a century and a half ago but are very, very ancient. Our whole faculty thinks about how to teach ancient great literature. Or the Gnostic Gospels; I try to figure out how to build a character out of various fragments of mythology.

Or I go to a presentation about a Korean goddess and look at the pictures. I really like to go to direct sources and that’s what I pay the most attention to.

I get a lot of inspiration from song lyrics. I love Ani Difranco’s music and lyrics. In Oakland, Melanie DeMore and Mary Watkins have put together a gorgeous version of “We Shall Overcome.” I collaborate with singer-songwriter AnneCarol, and also keep up with local kinds of things.

Are there other things you’d like readers to know?

I’d really like them to know that I am going strong–performing, reading, and writing. I’m teaching in these two programs. And I’m on Facebook. So “friend me!”

Daisy Hernández on Writing a Memoir, Bisexuality, and “The Kiss of Death”
Ayana Mathis: The Power of the Tribe
Jeffrey Round: On Becoming a Mystery Writer